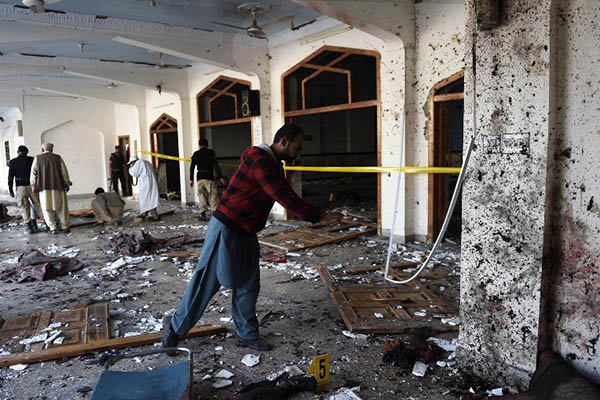 Taliban claimed an attack on a Shia imambargah in Peshawar. A. Majeed—AFP

Government officials at the Federally Administered Tribal Areas (FATA) Secretariat in Peshawar claim the federal government has warned them of threats to Shia Muslims in Khyber-Pakhtunkhwa province.

“The federal interior ministry has sent a letter to us through the Home Department warning of deadly threats to Shia Muslims,” said a senior official on condition of anonymity. “These letter were sent to the Home Departments of all the provinces to ensure action could be taken to avoid them,” he added.

According to the official, intelligence agencies have collected information about several potential attacks that could make 2015 the deadliest year on record in Pakistan if action isn’t taken against proscribed groups. “The letter clearly states that Lashkar-e-Jhangvi terrorists, patronized by Tehreek-e-Taliban Pakistan leader Mullah Fazlullah, are planning to target Shia Muslims,” he said. “The militants want to use these attacks to pressure the government to stop executions of convicted terrorists.”

Jundallah, reportedly in alliance with the LeJ, claimed responsibility for an attack on a Shia imambargah in Shikarpur last month. The attack left over 60 people dead and was followed by attacks on Shia mosques in Islamabad and Peshawar. imed 61 lives, the Taliban bombed another Imambargah, this time in Peshawar. Claiming responsibility for the attack in Peshawar, the Taliban claimed it was retaliation for the execution of Dr. Usman, recently hanged for his involvement in the 2009 attack on the Army headquarters in Rawalpindi.

According to the official the letter specifically warns of terrorist plans to set up camp in a primarily Shia residential area before opening indiscriminate fire. It also claims that the LeJ aligned itself with the TTP after Al Qaeda rejected its request for help.

The official said the Khyber-Pakhtunkhwa government had received information on active members of LeJ from intelligence agencies and had forwarded it to local law enforcement. He also said that the provincial government had decided to launch a massive crackdown on illegal refugees.

“Any Afghan refugees living in Khyber-Pakhtunkhwa without registering with the UNHCR can be picked up in an ongoing crackdown,” he said. “Police have also been ordered to round up Afghan imams [religious scholars] and deport them.”

The FATA Secretariat official said 224 Afghan imams were currently living in Khyber-Pakhtunkhwa. “Several of these imams are holding important positions in local mosques and the government wants to crack down on their incitement,” he said, adding that the imams targeted for deportation were provoking locals against the government and armed forces or urging them to jihad against NATO forces in Afghanistan.

A senior official of the Peshawar Police, speaking on condition of anonymity as he is not authorized to speak to media, confirmed the secretariat official’s claims. “Police have been told to monitor suspected members of banned groups,” he said. “If any clues are found about links to terrorist acts, we will immediately take them into custody,” he added.

This was very shocking for me when i read the recent statement of Imran Khan about the prosperity of KPK . He defend his Government s decission and talked about job opporcunities in his province but has he noticed the law n order situation in KPK ? Can he tell me that did he condmen shia killings ever indeed not . He is not Imran Khan but Talibaan Khan . The lives of Shia is at stake in all over Pakistan ? Why they are being tortured and killed by so called jihaadi ? Is this preaching of Islam ? Is this Teaching of our holy Prophet (PBUH) In my point of you whoever kills any innocent person he should be punished , he should be hanged , he should be disgraced because every human life is precious and gift for our society …………….not a debate on shia killings but shia community is being oppressed by the Government , these so called jihaadies , terriorists and it has not an end unfortunaltely .