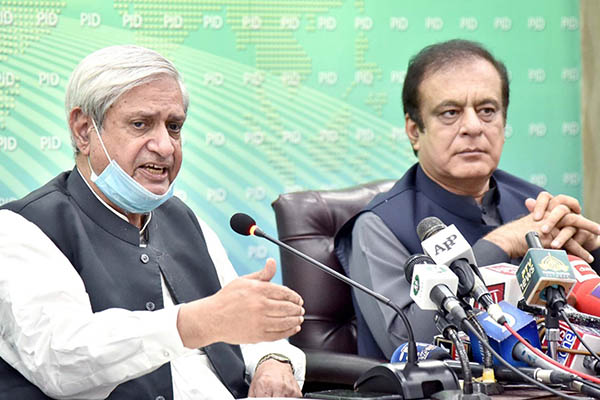 In press conference, information minister claims provincial government is refusing to release its share of wheat

Addressing a joint press conference with National Food Security Minister Fakhar Imam, Faraz reiterated his claims that the Sindh government—led by the opposition Pakistan Peoples Party—had played politics on the coronavirus crisis and accused it of doing the same with wheat. He claimed both Punjab and Sindh had higher wheat production this year and alleged that the sole cause of the shortage was the Sindh government. “The Sindh government is creating problems for us,” he said.

Admitting the impact of cartelization and hoarding, Imam claimed it was the responsibility of the provinces to identify such illegal actions. “Hoarding and smuggling are methods of creating scarcity,” he said. “Provinces should eliminate the cartels,” he added, without acknowledging Prime Minister Imran Khan’s claims that he would “personally” monitor and punish hoarders.

Imam said Sindh had procured 1.25 million tons of wheat, adding he had already requested the province to release this to ensure smooth supply of wheat.

The information minister also hit out at “profiteers,” claiming they were trying to discredit the government and strict action would be taken against them. The government has earlier claimed it would take strict action against the “mafias” of petroleum, sugar and wheat—all three commodities continue to see a surge in prices and shortages.

Meanwhile, National Food Security Secretary Omar Hamid Khan told journalists imported wheat to overcome the shortfall that Faraz claims does not exist would reach Pakistan by Aug. 25. He said 1 million tons of wheat was being imported, adding it would cost Rs. 1,780 for 40 kilograms.