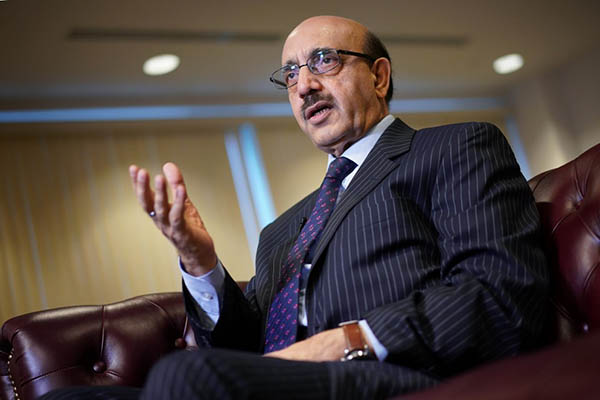 The leader of the Pakistani side of divided Kashmir is hopeful that India’s clampdown in the Himalayan territory has reached a turning point—bringing U.S. pressure.

Sardar Masood Khan was visiting Washington to meet lawmakers, media and experts after India on Aug. 5 rescinded autonomy on its side and sharply curtailed ordinary people’s communications. “There is a palpable shift in the United States,” said Khan, president of the section that Pakistanis call Azad Kashmir. “The pro-India sentiment here in the United States prior to the Aug. 5 steps was very strong because of the strong economic and strategic ties between the United States and India. But this is changing fast,” he said.

As evidence, he pointed to how a number of lawmakers have criticized the Hindu nationalist Prime Minister Narendra Modi’s policies in what had been India’s sole Muslim-majority state. This week, 14 Democrats led by Representative Pramila Jayapal urged Modi to restore internet and cellular service for Kashmiris, saying in a letter that U.S. residents had been unable to reach relatives.

President Donald Trump has literally rallied behind Modi, joining him at a mass gathering last month in Houston, but the State Department has asked India to bring back communications and release detained political leaders.

Khan said he was also grateful to U.S. and international media, who have faced restrictions in India-held Kashmir. “The media has after decades spoken up for the people of Jammu and Kashmir and not the Indian establishment, so that’s a major change,” he said.

India justifies its measures by saying it wanted to better integrate Kashmir and was trying to avoid trouble stirred up by Pakistan, which it accuses of arming and training guerillas. Kashmir, the trigger for two full-fledged wars between the nuclear-armed powers, has long inflamed passions in both countries.

Prime Minister Imran Khan, addressing the United Nations last week, accused India of plotting a “bloodbath” by sending in troops. But he has also publicly discouraged infiltration into the Indian side, which he said would hurt the cause.

Sardar Masood Khan said that youths in Pakistan-administered Kashmir were “seething with anger” and wanted to “fight for the rights of their brothers and sisters.” He added: “While we respect their sentiments and we share their sentiments, we do not want any unregulated activity across the Line of Control.”

India also ended restrictions on non-Kashmiris buying land in the Himalayan territory formerly known as Jammu and Kashmir. Khan accused India of following an Israeli model, encouraging Hindus to settle in Kashmir and “reduce the Kashmiri or Muslim majority in the state.”

Khan said he recognized the rights of Kashmir’s historic Hindu community, known as Pandits. Some 200,000 Pandits fled the Kashmir Valley after an insurgency against India erupted in 1989. “They should be brought back, they should be reintegrated into the mainstream and they should be given all sorts of guarantees for their protection—physical protection and protection of their rights,” Khan said.

Khan, a former Pakistani ambassador to Beijing, hailed the role of China, which arranged a rare Security Council meeting on Kashmir in August. Chinese Foreign Minister Wang Yi also mentioned Kashmir in his address to the United Nations, calling for neither side to “unilaterally change the status quo.”

“The people of Jammu and Kashmir and Pakistan are grateful to China for speaking up for the Kashmiris,” Khan said.

The United States has questioned why Pakistan is not also raising concerns about China, which according to rights groups has detained around one million Uighurs and other Muslims in re-education camps in western Xinjiang region in a step Washington says is reminiscent of Nazi Germany. Khan—who accused India of “genocide” in Kashmir—said that the two situations were “completely different.”

“Occupied Kashmir is a disputed territory that doesn’t belong to India and what they’re doing now is colonization,” he said.

Speaking of his past experiences in Xinjiang, Khan said China was “taking affirmative action to develop the region economically” and to “integrate” ethnic groups.

Indian Foreign Minister S. Jaishankar, who was also visiting Washington, said China had no business raising Kashmir, as New Delhi had not changed the status quo on the international front. But he also declined to join U.S. criticism of China on Xinjiang, saying: “Human rights comments are a much greater part of the Western political culture than the Asian.”