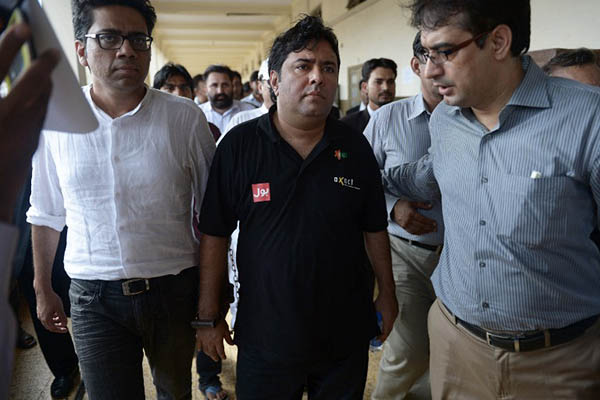 Investigators on Wednesday arrested the head of a firm accused of running a global fake degree empire and conducted fresh raids at its Karachi headquarters where they discovered thousands of blank diplomas.

Shoaib Ahmed Shaikh, the CEO of software house Axact, revealed the location of the blank degrees that were ready for printing as well as fake student ID cards during the course of his interrogation, magistrate Javed Malik told reporters. Another magistrate, Noor Mohammad Kalmati, on Wednesday remanded Shaikh into the custody of the Federal Investigation Agency (FIA) for seven days after he was formally charged, a court and FIA officials said.

Shaikh and six other company directors have been charged under laws relating to fraud, cheating, money-laundering and illegal electronic money transfer, the officials said. Kalmati ordered FIA officials to present their interrogation report to the court later.

Pakistan began investigating Axact after it was accused by the New York Times earlier this month of running a network of websites for phony universities as part of an elaborate scheme that generated tens of millions of dollars annually. Islamabad has also sought the assistance of the U.S. Federal Bureau of Investigation and Interpol in the probe.

The Times report quoted former employees and analyzed more than 370 websites of fake universities, accreditation bodies and other purported institutions. It cited clients from the U.S., Britain and the United Arab Emirates who had paid sums ranging from thousands to hundreds of thousands of dollars for their degrees.

The “university” websites mainly routed their traffic through servers run by companies registered in Cyprus and Latvia, and employees would plant fictitious reports about Axact universities on CNN iReport, a website for citizen journalism. Axact had also announced plans to launch a news channel called BOL, which had hired many of Pakistan’s leading TV anchors at above-market salaries. Many of the journalists have resigned in the wake of the scandal.