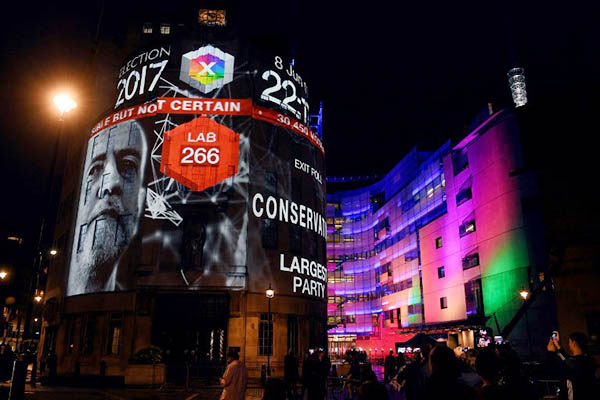 With a coalition government on the cards, experts say U.K. may be forced to soften tone in Brussels negotiations

With Brexit talks due to begin in just over a week, Britain’s shock election results may soften the government’s strategy—if there is even a government formed to negotiate in Brussels by then.

The country could be plunged into uncertainty for weeks as Theresa May seeks to form a government, after her Conservative party lost its overall majority as indicated by near-complete results. Current plans to start negotiations in the week of June 19 may have to be delayed, experts said.

When the talks do begin, there could be a very different approach from the “hard Brexit” advocated by May that would involve leaving Europe’s single market and curbing European immigration. “What the U.K. asks for might not be quite as hard, quite as tough as she was asking for before. We might see a softening of the stance in response to this election result,” said Simon Hix, politics professor at the London School of Economics. “The terms of us leaving are so much more up for grabs than they were before,” he said.

His LSE colleague Paul Kelly said the result would weaken May’s hand in Brussels, where she is due to attend a summit on June 22 and 23. German Chancellor Angela “Merkel will notice that, [French President Emmanuel] Macron will notice that. Everybody will notice that and that changes the dynamic,” Kelly said. “She has to go and ask for things now and they can say ‘well we’ll see’.”

Paula Surridge, senior lecturer at Bristol University, said it may take time to get to the negotiations in the first place. “The offer of the E.U. to extend the period before negotiations start may well be very necessary,” she said.

Britain voted 52 percent in favor of leaving the E.U. in a shock referendum last year, becoming the first ever member state ever to do so, but the regional breakdown of the results varied hugely. Among Friday’s election surprises were the spike in support for the opposition Labour party in London, which voted overwhelmingly to remain in the E.U., and a strong showing for the pro-European Liberal Democrats.

The Lib Dems, which had campaigned for a second referendum on the terms of Brexit that could mean Britain staying in the bloc, was forecast to gain several seats in areas that voted for “Remain.”

May called the snap election in April saying she wanted to increase her majority in order to have a stronger position in Brexit negotiations. At the time she was riding high in the polls and she pushed a tough message on Brexit on the campaign trail, saying she was planning to be a “bloody difficult woman” in Brussels.

But a series of campaign missteps followed and instead of boosting her party in Labour-held seats that voted for Brexit, her rhetoric may have turned voters off. “Looks like it was the Brexit election after all. But not quite the Brexit election we expected,” said Rob Ford, political science professor at Manchester University.

Brexit backers on Friday voiced concern about the possibility of a full reversal, even after May triggered Article 50 of the E.U.’s Lisbon Treaty to begin the formal Brexit process in March. “Article 50 has been triggered and we were on our way. May has put all this in jeopardy,” said Nigel Farage, a leading campaigner for Brexit in last year’s referendum. “The timetable, whatever happens here, is likely to be pushed back,” the former U.K. Independence Party (UKIP) leader said. Farage warned that in the event that May cannot form a government and Labour creates a coalition “then I think Brexit is in some trouble.”

“We may well be looking down the barrel of a second referendum,” he said.

Gina Miller, a leading voice for Britain staying in the E.U., said the vote was a sign that voters were rejecting May’s proposition of a “hard Brexit.”

“I think that Brexit actually is going to have to be negotiated in a very different way,” she told ITV.

Alistair Campbell, Labour prime minister Tony Blair’s former spokesman and a strong E.U. supporter, said: “This election is a rejection of May and hard Brexit. A vote for one to go and the other to be revisited.”

Some E.U. officials had voiced hope that a stronger majority for May could allow her to make more concessions in the negotiations. Preliminary results indicate she will instead face a far tougher balancing act between europhiles and eurosceptics within her own party.

“She will need to worry about maintaining the support of Conservative M.P.s who are both critical of Europe and critical of her decision to hold an election and squander the Conservative party’s majority,” said John Bartle from the University of Essex.