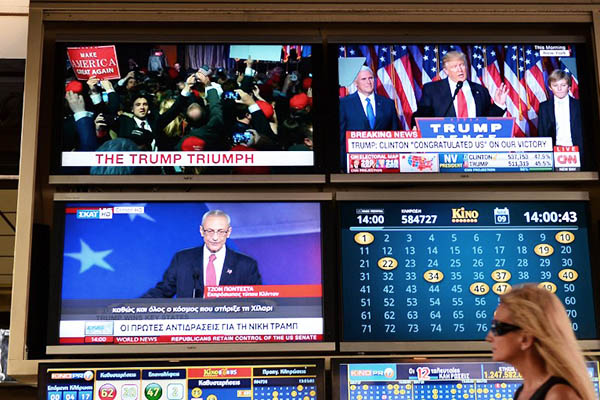 The American news media, kicked around by Donald Trump for months, is now kicking itself over how it handled the 2016 presidential election. How did journalists fail to see the Republican surging to victory? Did the “free publicity” a fascinated media gave Trump early on help him gain momentum? And did Trump’s feuding with news organizations boost him with a public deeply distrustful of the media?

Washington Post media columnist Margaret Sullivan called the 2016 campaign “an epic fail” for the news media. “To put it bluntly, the media missed the story,” she wrote. “In the end, a huge number of American voters wanted something different. And although these voters shouted and screamed it, most journalists just weren’t listening.”

“The misfire on Tuesday night was about a lot more than a failure in polling,” said Rutenberg. “It was a failure to capture the boiling anger of a large portion of the American electorate that feels left behind by a selective recovery, betrayed by trade deals that they see as threats to their jobs and disrespected by establishment Washington, Wall Street and the mainstream media.”

The relationship between Trump and the media has been complex ever since he began his maverick run for the presidency.

Sullivan said Trump was helped by “huge amounts of early, unfiltered exposure in the months leading up to the Republican primary” as rolling news networks broadcast his every appearance on a loop.

Some analysts have claimed the media coverage amounted to the equivalent of $2 billion in advertising, fueling his win in the primaries.

“Early on in the campaign the press both covered him widely and didn’t take him seriously,” said communications professor Chris Wells at the University of Wisconsin, who led a study this year on Trump’s use of media in the primaries.

The study found Trump excelled in making himself the center of attention—with a steady stream of provocative and outlandish comments—and the media latched on in a race for viewers. “Trump proved himself uniquely able to satisfy the imperative of dominating the news agenda, entering the news cycle… and repeatedly re-entering it, with stories and initiatives so that subsequent news coverage is set on your terms,” Wells and colleagues wrote.

Some reports said cable news networks like CNN, Fox and MSNBC that have been struggling in recent years revived their fortunes during the campaign, largely due to the Trump factor. Media organizations, despite their antipathy for the populist candidate, realized they “could generate a lot of clicks with Trump stories,” Wells said.

For Dan Kennedy, a journalism professor at Northeastern University, Trump “understood the modern media environment better than anybody in public life and was able to exploit that from the way he was able to make himself the star. The story was always about him”

Kennedy argues that it is unfair to criticize the media for misreading the U.S. electorate, pointing out that Clinton apparently holds a narrow victory in the popular vote, although not in the decisive Electoral College. “The media did a pretty good job of driving home what a flawed figure Donald Trump was,” he said.

As the media’s coverage turned more aggressive, skewering Trump over his financial dealings and allegations of sexual misconduct, the candidate hit back at what he called the “lies” of a “corrupt” media. In the final stretch of the campaign the overwhelming majority of mainstream media were critical of the Republican, with American news outlets going so far as to call him a “liar” on their news pages.

Even then, Trump was able to tell a “counter-narrative” on social media and alternative news sites to mollify his supporters, and perhaps even energize them. His stance came with Americans’ trust in the mass media at a new low: a Gallup survey this year found just 32 percent had confidence in the media’s ability “to report the news fully, accurately and fairly.”

According to Wells, the media’s criticism slid from Trump “like water off a duck’s back” because “the messenger had such low credibility with his core base.”