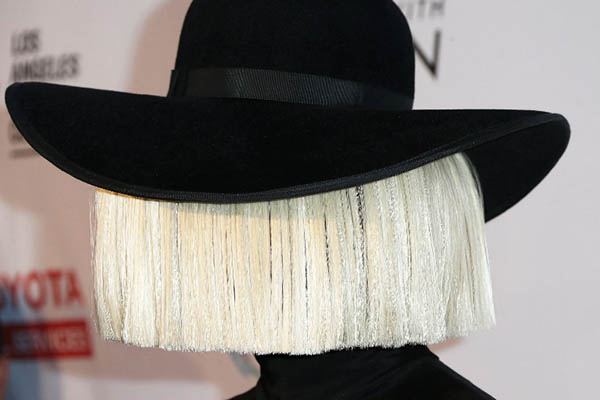 Anonymity-loving pop star’s new album has her ‘acting’ for other stars.

For her first album since her breakthrough hit “Chandelier,” Sia is facing off on the charts against superstars Adele and Rihanna. And they are likely familiar with some of the songs—they were originally written for them.

This Is Acting, the seventh album by the Australian singer known both for her distinctively soaring voice and her face-covering black-and-white wig, consists of tunes that she wrote, offered to other artists and, after deals fell through, salvaged. For Sia, the album is a multidimensional paradox. She is interpreting her own songs, ones that are often highly personal. But they were intended to come from the hearts of others.

The album’s first single, “Alive,” was meant for Adele as part of her blockbuster 25. “Alive” matches the mood of 25, as Sia—playing the role of Adele—reminisces of her childhood and her survival into adulthood to a tune that opens with richly dark piano chords before a rapid climax.

“I’m still breathing / I’m alive,” sings Sia in one of her strongest performances, her voice gliding from soulful to roaring with a touch of rasp.

Sia, speaking to Apple Music’s Beats 1 radio, said she was surprised that Adele did not want “Alive.” “I thought this one was such a smash but she just wasn’t feeling it,” Sia told the station, whose host Zane Lowe described the album’s concept as playing “fantasy football with the world’s pop stars.”

Sia similarly appears to channel Beyonce on the more inspirational “Footprints,” a string-backed, mid-tempo pop song that uses subtle spiritual imagery to describe salvation either by a partner or God. A more conventional pop ballad, “Reaper,” was co-produced by rap star Kanye West.

Sia wrote “Reaper” and the up-tempo “Cheap Thrills” for Rihanna, who released her long awaited Anti album on Wednesday. But the R&B superstar, whose new album focuses on inward-looking ballads, rejected them.

Even giddier is “Move Your Body,” a club-style dance track that Sia wrote for Shakira.

The 40-year-old singer, whose real name is Sia Furler, had her start in the jazz scene of Adelaide and remains more at least in the indie world than with pop celebrity. But she has become a major writer for pop stars, notably composing Rihanna’s 2012 worldwide hit “Diamonds.”

Sia, who keeps her face hidden to preserve her anonymity, has struggled with addiction, a battle that figured prominently on her last album, 1000 Forms of Fear, which came out in 2014. The album’s hit “Chandelier,” an electropop ballad of a party girl’s alcohol-fueled self-destruction, was nominated for Grammys for Song of the Year and Record of the Year.

Sia returns to dark territory on the latest album by exploring abusive relationships. In “House on Fire,” armed with one of the album’s most powerful musical hooks despite a conventional synthesizer arrangement, Sia uses the title as a metaphor for personal chaos. The similarly bleak “Bird Set Free” was written for Adele, who did not find it suitable.

Speaking to Rolling Stone magazine, Sia said she thought most of her songs for pop stars were “terribly, terribly cheesy.” But Sia acknowledged that she knew a successful tune when she wrote one.

“It really seems like the general public responds well to songs about salvation or overcoming something, or that everything’s going to be okay, or that things are fun,” she said. “I think that my skill is more upbeat curating, as in choosing the right tracks and then sort of trying to understand the will or nature of popular culture.”