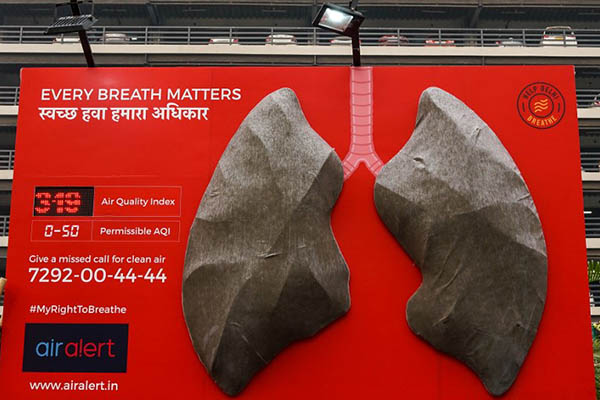 A pair of artificial lungs put up in New Delhi to demonstrate the lethal effects of smog have turned a sickly dark brown within 10 days of their installation, underscoring the city’s pollution crisis.

Delhi, the world’s most polluted major city, has been covered in a toxic grey haze since the onset of winter last month, with pollution levels several times higher than the World Health Organization’s safe limits.

The oversized lungs, put up on Nov. 3 on the premises of the Sir Ganga Ram hospital and white at first, had been fitted with high-powered particle-trapping filters to mimic the way a human body functions.

“The most striking bit is the rapidity with which the lungs have turned black. It is absolutely frightening,” said Arvind Kumar, a lung surgeon who has been campaigning to raise awareness about the dangers of air pollution.

As cooler air traps pollutants close to the ground, levels of PM2.5—particles so tiny they can enter the lungs and bloodstream—have soared dangerously.

“There is no reason to believe that the same material is not getting deposited in our lungs as well,” said Kumar. “The health consequences of this is going to be disastrous.”

On Tuesday, PM2.5 levels in the city touched 263, more than 10 times the recommended average of 25, according to the U.S. embassy in Delhi, which independently monitors air pollution. It had hit a peak of 369 at 11 a.m. before a brief spell of rain brought some respite.