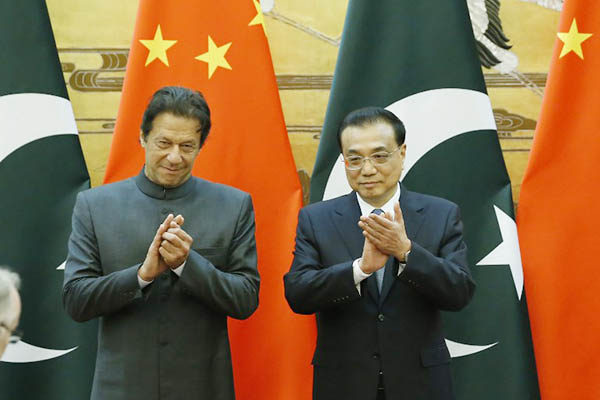 China agreed to “firmly move forward” infrastructure projects in Pakistan, following a meeting between Prime Minister Imran Khan and his Chinese counterpart Li Keqiang on Saturday, as the South Asian nation seeks to stave off a financial crisis with aid and investment from the world’s second largest economy.

The agreement follows concerns that Islamabad’s spiraling financial crisis could lead Beijing to scale back its projects in the country, where it is helping to build the multi-billion dollar China-Pakistan Economic Corridor (CPEC)—which aims to increase energy and transport links between the western Chinese region of Xinjiang and the Arabian Sea.

The project is at the heart of Chinese President Xi Jinping’s Belt and Road Initiative, an ambitious, globe-spanning trade and infrastructure program.

The massive undertaking has drawn both praise and criticism from around the world, with some saying the initiative is filling a critical funding gap in the developing world, while others fear the Chinese loans financing the work are designed to entrap their recipients in debt.

In Pakistan, Belt-and-Road-linked projects have come in for heavy criticism for their opaque lending terms, with some arguing that Beijing’s largesse may worsen Islamabad’s fiscal dilemma.

But both Pakistan and China played down those concerns on Saturday, describing the program as a key part of Islamabad’s recovery plans.

In his meeting with Li, Khan invited the Chinese premier to visit Pakistan and see for himself the difference the mega-project has made in the country. “CPEC in 2013 was just an idea. Now it is on the ground. And it has caught the imagination of the people of Pakistan,” he said. “We feel that this a great opportunity for our country to progress, to attract investment. It gives us an opportunity to raise our standard of living, growth rate.”

“Pakistan has always been regarded as a foreign policy priority by China,” he added.

Following their talks, the two leaders oversaw the signing of 16 cooperation agreements, according to a Chinese vice foreign minister, Kong Xuanyou, who said the countries “will firmly move forward CPEC, while ensuring the smooth operation of completed projects, and advancing the ongoing projects.”

Officials provided only a general list of the agreements, which appeared to be largely political, rather than economic.

Asked about future cooperation on infrastructure, Kong said “there’s been no change in the number of CPEC projects,” adding that “if there were to be any change, it would be an increase going forward.”

“CPEC will be introduced to more areas of Pakistan and will also tilt in favor of areas relating to people’s lives.”

Khan’s meeting with Li follows talks with President Xi Jinping on Friday, where the former cricket star bemoaned his country’s financial woes, saying the economy was at a “low point.”

Since taking power in August, Khan has sought loans from “friendly” countries like Saudi Arabia, which has agreed to provide Pakistan $6 billion in funding.

His government has also entered talks with the International Monetary Fund over a potential bailout as it grapples with a balance of payment crisis and current account deficit.

Pakistan has gone to the IMF repeatedly since the late 1980s. The last time was in 2013, when Islamabad got a $6.6 billion loan to tackle a similar crisis.