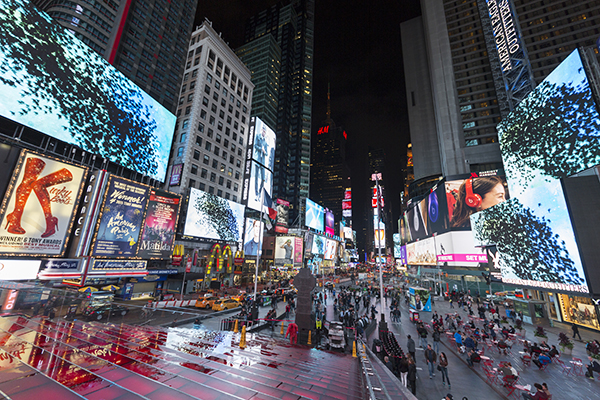 Part of the Midnight Moment program organized by The Times Square Advertising Coalition and Times Square Arts, with Gopi-Contagion Sikander is the first Pakistani to have her work displayed across the iconic Manhattan attraction.

The piece by Pakistan’s celebrated-abroad artist features hundreds of digitally animated drawings manipulated to explore the concept of swarming as an observable phenomenon.

“My process is driven by my interest in exploring and rediscovering cultural and political boundaries,” she says, “and using that space to create new frameworks for dialogue and visual narrative. In my work, deconstruction is not limited to the miniature-painting format; it extends to the reimagining of historical content and entrenched symbols.”

The flocking particles that make up Gopi-Contagion represent silhouettes of hair from the Gopi, women worshippers of Hindu god Krishna. Set in motion, these silhouettes take on associative forms—insects, birds, bats. “The flocking reflects behavior of cellular forms that have reached self-organized criticality, resulting in a redistribution of both visual information and experiential memory,” says Sikander.

“Sikander deconstructs form before our eyes to construct a new visual landscape,” says Tim Tompkins, president of the Times Square Alliance. “This piece demonstrates how an artist can take formal mediums such as painting and illustration and make them relevant on our new technology,” says Fred Rosenberg, president of the Times Square Advertising Coalition, “Artists like Sikander make the best use of how the electronic billboards can bring unusual context to an audience that they would never be able to encounter on their home televisions and computers.”

Midnight Moment, which premiered in May 2012, is an initiative by sign operators in Times Square (including NASDAQ, Thomson Reuters, CNN, Bank of America, and Disney) to “display synchronized, cutting-edge creative content” on electronic billboards and kiosks throughout Times Square. Its purpose is to collaborate with “contemporary artists and cultural institutions to experiment and engage with one of the world’s most iconic urban places … to help the public see Times Square in new ways.”

Sikander graduated from the National College of Arts, Lahore, with a degree in miniature painting, and earned her M.F.A. from the Rhode Island School of Design. In 2006, she received the MacArthur ‘Genius’ award. Six years later, she received the inaugural Medal of Art by the U.S. State Department. Her work is currently on display at the Guggenheim Museum in Bilbao and at Tufts University.

What an amazing message of peaceful cultural and political bondings and message of artistic third world maturity and giving a new dimension in the field of arts….bravo and congratulations Shazia sikander. ..keep it up and we’ll done.