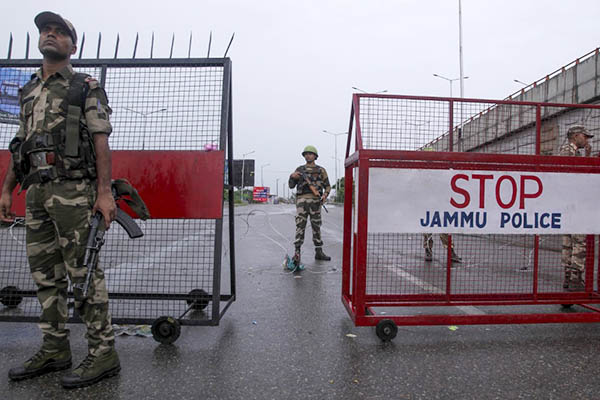 Armed soldiers stand in front of coils of barbed wire in India-Occupied Kashmir’s summer capital of Srinagar as a massive security lockdown imposed on the restive region by the Hindu nationalist government takes hold.

An eerie silence hangs over the city, punctuated by sporadic bursts of gunfire and the rumbling of armored vehicles moving through near-empty streets.

New Delhi stripped the Himalayan region of its seven-decade-long semi-autonomous status on Monday through a contentious presidential decree, just hours after it imposed a crippling curfew on the valley.

Home to more than one million people, Srinagar now appears a ghost town: armed soldiers on street corners and in front of barbed-wire barricades are among the few people to be seen. Locals and even security personnel fear that once the curfew lifts, unrest will break out as protesters vent their anger and frustration at the national government’s action.

“You can’t hold a state under curfew forever,” Iltija Javed, daughter of detained former chief minister Mehbooba Mufti, told AFP from Srinagar. “I’m sure people in the valley are not going to take this lying down.”

An armed rebellion against Indian rule has raged in the valley since 1989, claiming more than 70,000 lives, mostly civilians. Long a semi-autonomous state where only local residents could buy land or take government jobs, Kashmir’s new status is as a territory directly ruled by New Delhi.

With phone and internet services still cut and movement around India-Occupied Kashmir restricted, it is difficult to gauge how residents feel about their loss of autonomy—if they know at all. But those that AFP spoke to were fearful about what will happen next.

“Not even in my wildest dreams had I thought India would ever do this to us. I have lost every hope in the Indian democracy and there’s a sense of hate for them now,” said Srinagar local Shahnawaz Hussain.

Sporadic protests have taken place, and one youth chased by police jumped into a river and died.

At least six people were admitted to a Srinagar hospital with gunshot wounds and other injuries, a source at the facility told AFP. Authorities continue to insist the region is peaceful. There is already hostility towards scores of migrant laborers lugging heavy bags as they look for transport out of the territory.

“Go back from here, this is our land,” voices shout from a nearby building. “We know Kashmir is seething, it will explode into violence but we don’t know when,” a security official told AFP on condition of anonymity. “I don’t know how the lockdown can be lifted without an explosion of protests.”

He told AFP the satellite phones issued to around 300 administration and police officers were barely working, adding: “It’s as if some invisible natural calamity has hit us.”

Meanwhile, soldiers man checkpoints about every 100 meters on main roads and only people in essential jobs are allowed to leave their homes. Large coils of razor wire cut off neighborhoods as thousands of paramilitary troops patrol the streets.

Within neighborhoods, some residents walk along small lanes while young children ride on scooters to rid themselves of boredom. Most shops are closed and residents said no fresh produce is arriving.

Pigeons and stray dogs in the scenic squares are untroubled by tourists, who fled in droves over the weekend after authorities ordered them to leave. A repeated sentiment expressed by locals to AFP is they have lost their identity.

“We are doomed, we have lost our identity today… We never felt like Indian citizens but now ‘officially’ this is India,” Srinagar resident Mohammed Asif, 28, said.

For university student Adil Ahmad, from central Kashmir’s Budgam district, the development is nothing short of a “calamity.” He added: “There’s no hope for the future. May God help us.”