Sindh Government Had No Role in Safdar’s Arrest: Maryam Nawaz 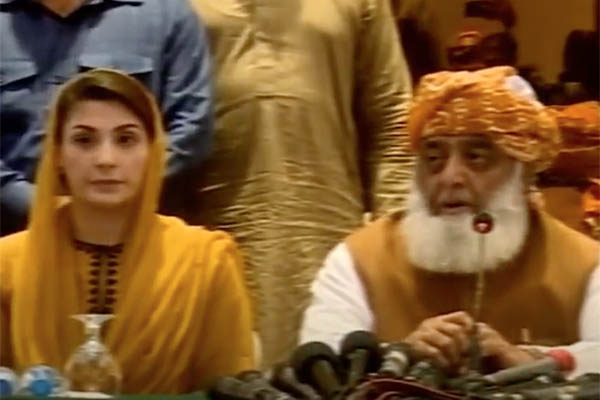 Not even for a second did I think that my husband, Capt. (retd.) Mohammad Safdar had been arrested at the behest of the Sindh government, Pakistan Muslim League (Nawaz) Vice-President Maryam Nawaz said on Monday.

Addressing a press conference in the afternoon to address questions about Safdar’s arrest from their Karachi hotel room early in the morning, she said that anyone who was trying to paint this as a move initiated by the Pakistan Peoples Party (PPP) was willfully ignorant. “We know what game is being played,” she said.

Narrating the events of the morning, Maryam said that they had reached the hotel late after the conclusion of the previous night’s rally and had gone to sleep after Fajr prayers. “Around 6:15 a.m., someone started to loudly bang on our door,” she said. “Safdar opened the door and police were standing outside. They said we are here to arrest you. Safdar told them he’ll go with them and asked to take his medicine, since he is diabetic. But they broke down the door and barged inside,” she added.

“Safdar asked them to not enter, saying my wife is inside, but they came inside anyway and arrested him,” she said.

Maryam said she had spoken to Sindh Chief Minister Murad Ali Shah and PPP Chairman Bilawal Bhutto-Zardari since the arrest. “Bilawal was very angry and told me he was embarrassed that their sister, their guest had been treated in this manner,” she said, thanking him for his support.

“Murad Ali Shah has also told me details of what actually happened and how this arrest occurred but I won’t share those right now because an investigation is ongoing,” she said. “Just know … we are aware and alert that such things will happen. We are ready for this,” she said in a message directed toward the forces behind the arrest.

“People drunk on power never think their actions through,” said Maryam. “When you think only through power, you often make such mistakes,” she said, adding that the government’s high-handed actions had made the opposition’s jobs easier. “You’ve given us a chance to show that Nawaz Sharif’s comments about a ‘state above the state’ and ‘a government above the government’ were right,” she stressed.

Talking about the specific case under which Safdar was arrested, Maryam questioned why slogans that reflected the Quaid’s ideology prompted such action, while an earlier instance of PTI supporters shouting pro-Imran Khan slogans had not attracted any legal response.

“No one shouted ‘Maryam Nawaz Zindabad.’ Just ‘Vote ko Izzat Do’ (respect the vote),” she said. “The only ones who could have an issue with this slogan are those who stole the election. Those who have declared every elected official of Pakistan, including Quaid’s sister Fatima Jinnah, a traitor,” she added.

“Don’t you know the times have changed? We all know who the ‘unknown persons’ are. Will people not realize who is really behind this?” she said, challenging authorities to arrest her directly instead of going after her loved ones. “Stop trying to blackmail me,” she warned.

The PMLN leader also claimed that the complainant, a Waqas Ahmed Khan, had been found to be a PTI worker who was an absconder in a terrorism case. The complainant seeking a treason case against the PMLN leadership, Badar Rasheed, had boasted a similar profile.

Earlier, Jamiat Ulema-e-Islam (Fazl) chief Maulana Fazlur Rehman, who also serves as the chief of the 11-party Pakistan Democratic Movement (PDM), condemned the arrest, questioning how the police had justified breaking into the room of people who had no reason to flee. “How can we tell the world we’re a responsible state when you indulge in such human rights abuses?” he asked.

Confirming an unverified report that had gone viral on social media in the morning, he alleged the Inspector General of Police in Sindh had been taken into custody and forced to agree to Safdar’s arrest. “When IG Police refused to act against them [PMLN leaders] in his own home he was arrested. He was then held hostage in the office of powers-that-be for four hours and was forced to register an FIR,” he claimed, flanked by Maryam and the PPP’s Raja Pervaiz Ashraf.

“Now you tell me who is in power,” he asked, adding that the Sindh government has clarified its point of view. “This attack is not on Maryam but on entire PDM,” he warned and demanded that Safdar be released immediately and those who took the law in their hands made to apologize.

The PPP’s Raja Pervaiz Ashraf also offered his condemnations, and maintained that neither the PPP, nor the Sindh government, had played any role in the arrest. “We could never even think of treating someone who is a guest of ours in this manner,” he said.

Safdar was taken into police custody early on Monday morning, after a First Information Report was registered against Maryam, Safdar and 200 others for allegedly violating the sanctity of the Quaid’s mausoleum. The complainant alleged that the PMLN leaders, along with 200 of their followers, had shouted slogans in violation of law and had also threatened him with murder.

Government ministers have maintained that as security falls under the purview of the provincial government, the arrest has been done with the backing of the Sindh government led by the PPP. Sindh lawmakers have denied this.