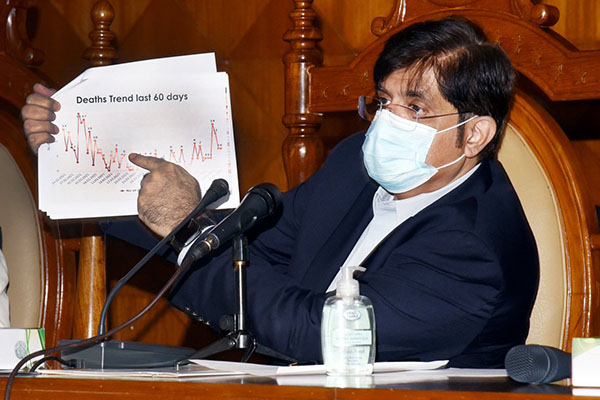 The Sindh government on Monday announced new restrictions to curb the spread of the novel coronavirus, with Chief Minister Murad Ali Shah warning that the daily infection rate had nearly tripled in the past two months.

“The daily death toll had also reached zero [earlier this month], but has now once again started to increase,” he said, adding that the provincial government had decided to act now rather than wait for the situation to deteriorate.

Detailing Sindh’s decisions, Shah said that shops would be required to ensure all customers and employees wear face masks, adding that any deviation from the SOPs would result in an immediate sealing of the establishment. If cases continue to rise, he warned, markets would be shut down entirely. He said the provincial government had also decided to seek the support of the Pakistan Army, in line with directives of the National Command and Operation Center, to enforce the implementation of SOPs among the citizenry.

The chief minister also provided details on relevant statistics about the coronavirus situation in Sindh, noting that the province had 664 ventilators available, of which 47 were currently occupied. He said 164 patients required oxygen support but were not on ventilators. Referring to neighboring India’s concerns with an oxygen shortage, he said Sindh had three hospitals that had oxygen generation plants, adding that the government is attempting to buy additional plants from abroad. “Our plan is to ensure all tertiary hospitals in the province have their own oxygen plants,” he added.

Shah said the provincial government would once again recommend the NCOC to suspend all transport services until a week after Eid, warning that until interprovincial travel can be curtailed, cases would continue to increase. “We also need to shut international airports,” he said, and lamented that the federal government was more concerned with Eid shopping that public health.

The Sindh chief minister’s press conference followed a meeting of the provincial Task Force on Coronavirus during which authorities were briefed on the prevailing pandemic trends.