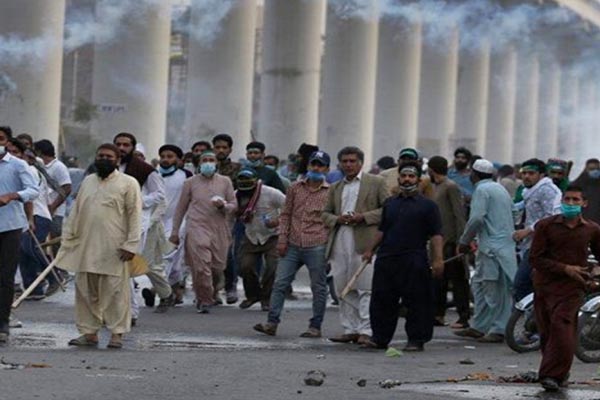 In press release, lawyers’ body urges end to media gag; calls on ‘deep state’ actors to take responsibility for actions that led to this unrest

The Sindh High Court Bar Association on Monday slammed the Pakistan Tehreek-e-Insaf-led government’s “utter failure” to peacefully resolve the crisis provoked by the Punjab government’s arrest of Saad Rizvi, the chief of the now-banned Tehreek-e-Labbaik Pakistan, and called on the “deep state” to take responsibility for past errors and pledge to desist from such actions in the future.

“The Sindh High Court Bar Association condemns the utter failure of the PTI government to peacefully resolve this crisis,” read a press statement. “The government’s reaction has swung from willful blindness to disproportionate and lethal force,” it said, noting the grief caused by the loss of innocent lives during the ongoing protests. “Moreover, poorly thought-out and legally questionable acts like the hasty proscription of TLP under the Anti-Terrorism Act during the current protests have exacerbated the crisis,” it said, adding that if such a move was warranted, it should have been implemented when the TLP publicly called for the assassinations of the Chief Justice of Pakistan and the Pakistan Army chief during earlier protests.

Stressing that the Sindh High Court Bar Association considered the primary culprit for the current violence the “forces within the deep state that have continuously encouraged and fostered the weaponization of religion for political objectives in the past without any thought” for the consequences, it called upon these actors to “own responsibility for their past errors and take positive measures to mitigate the fallout from those errors and to desist from” such misadventures in the future.

“Such forces are duly identified in Justice Qazi Faez Isa’s judgment of the previous TLP protests in Faizabad [in 2017],” it said. “The failure to implement and take lessons from that judgment (and choosing to target Justice Isa instead) have created the instant crisis,” it added.

The lawyers’ body also criticized the government’s blanket ban on broadcast media’s coverage of the TLP protests, noting this had created an information vacuum that actually fueled the spread of disinformation via social media. “The Sindh High Court Bar Association also condemns the unconstitutional gagging of electronic media in relation to the protests,” it said. Noting that channels should show restraint in coverage of such protests, “such a blanket ban only fuels the disinformation being spread on social media. The public’s right to know must be respected by the government and PEMRA.”

The Sindh High Court Bar Association represents around 2,500 lawyers of the southern province.

The TLP launched a nationwide protest last week after the government arrested its chief, Saad Rizvi, and reneged on an agreement to expel the French envoy and cut all ties with the European nation over the publication of blasphemous caricatures. While that initial unrest was brought under control after the government banned the organization under anti-terror laws, TLP supporters this weekend attacked a police station, and took several policemen hostage, prompting a fresh wave of violence that left three people dead and dozens more injured.