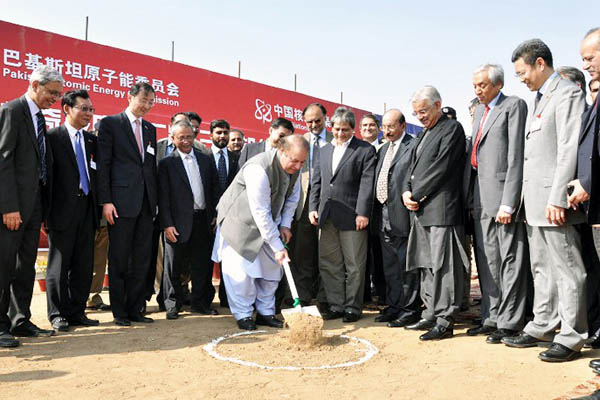 Prime Minister Nawaz Sharif at a ceremony launching the construction of the atomic power plant at Paradise Beach. PID—AFP

Two-member bench summons stakeholders to next hearing on Nov. 11.

The Sindh High Court on Thursday blocked the Pakistan Atomic Energy Commission from establishing two nuclear power plants on the outskirts of Karachi in violation of environmental laws.

During proceedings on Thursday, the petitioners’ counsel, Abdul Sattar Pirzada, submitted that the PAEC intended to build the K-2 and K-3 reactors using the ACP-1000 design, which has not been constructed or tested anywhere else. The 1,100MW power plants, which are to be built by the China National Nuclear Corporation (CNNC), have “unclear” safety precautions, said Pirzada, adding that any malfunction could prove disastrous for the 21 million estimated residents of Karachi.

The petitioners’ lawyer claimed that the nuclear disasters in Japan (2011) and Ukraine (1987) had raised concerns about the safety measures adopted in nuclear plants. He said reactors located so close to a major population hub like Karachi required planning for mass evacuation in case of a nuclear disaster. He told the judges that the city lacked the infrastructure for evacuations.

According to Pirzada, the nuclear project was granted an environmental impact assessment without fully complying with environment protection laws, adding that no public hearing had been organized to take all stakeholders’ concerns into consideration. The lawyer urged the judges to declare the project illegal until a public hearing could be organized to determine the suitability of the reactor location.

Pirzada told Newsweek his clients did not wish for the project to be cancelled, as was being presented in the media. “I’m dismayed to see in the press that the perception is that [the petitioners] don’t want the plant to open, that they are against energy generation in Pakistan,” he said. “That is not correct. What they are simply saying is that they have a right to attend a public hearing so all concerns of the public could be addressed.”

The petitioners’ counsel said this was not a matter of national security, but personal safety. “In a place like Pakistan, where governance is so poor anyway and the administration has failed to act on so many occasions, what kind of contingency plan can they have?” he asked, noting that transparency would ensure “all concerns of the public could be addressed.”

Talking to Newsweek via email after the stay order had been issued, Hoodbhoy said he had been forced to turn to the courts after the PAEC had refused to hear the petitioners’ concerns. “They tell us our fears are baseless” because “accidents can’t happen, we’ll be very careful, tsunamis are not coming to Karachi.” He said the PAEC had also claimed it could not share environmental assessment reports on the project because it’s a matter of “national security.” He said they had also claimed the International Atomic Energy Agency has visited the site and declared it safe. “The IAEA is not responsible for nuclear plants. It does not analyze what specific reactors may do under different circumstances. That is not their job,” he added.

He said the project could only be viable if it were moved far away from any major population centers, noting that this was law in the U.S. “They [government] do not have a major evacuation plan for Karachi,” he said. “For Pakistan you have an additional issue where you do have people who want to willfully inflict damage,” he said, adding, “At least the PAEC is being forced to hold a public hearing about the safety aspect, something it has steadily refused to do.”

So for Sharmeen Obaid Chinoy and Pervez Hoodbhot et al,
saving the fish in the arabian ocean is more important than providing much needed energy to the country and possible saving countless lives that are suffering from crippling power cuts.

compared to USA, China, EU ,pakistan does not degrade the enviornment even a fraction,
those countries have pumped as much toxic chemicals into the atmosphere as they could in order to industrialize and acheive energy security……we dont even have a semblance of energy security and these people want to scrap much needed energy projects.

dumbfounded by their disregard for the travails of the common man

Hoodbhoy is a media attention thirsty maniac, who will do anything to make his way in the decision making channels of the national interest matters. All that matters to him is a flash on media, which he got.

Petitioners are touts of those do not want energy and other crises solutions in Pakistan. Their every versions are against Pakistan and their versions of talk and acts are same like India, US, UK allied Evil Elites Rulers…. their journalists, anchores, lobbies, etc…..
So, this is the survival of Pakistani nation on all low cost and long run energy solutions on nuclear and other sources…
This is not early 20th century …. in this 21ist century every one knows why traitors opposed real and genuine issues of the public and nation and all these traitors opposes are very well known by the people and the majority of the public.
So, people those are with the nation and the public of Pakistan and with the development of the human are rejected these planted traitors petitioners against PAEC and our other well growth department.
Specially for HoodBhoys …. he is mmmFFFFFFF

There is absolutely ZERO governance in Pakistan today! Its a shame given the quality of our politicians who are an illiterate bunch of ‘khud garzs’! The petitioners did well to advance the stay order. We need more introspection before we can proceed, hopefully in more capable hands. Well done Sattar Pirzada! Keep this blocked until we can find sensible people to deal with these issues!

It is important to understand the differences in levels of radioactivity release in case of nuclear accident like Chernobyl, nuclear accident like Three Mile Island (TMI) or a nuclear weapon explosion. Mixing facts with fiction can present doomsday scenarios but are in no way helpful in understanding the issue. Also, measures for safety and security are put in place and contingency plans are devised to address any foreseeable contingency.

Rather than Character bashing and Challenging other loyalties, Can’t we keep this as an intellectual debate? This is a sensitive issue technologically and environmentally. Lets have some convincing arguments from both side. Hiding of any information won’t prevail.

i agree with the Florentina J. commnet , first have to clear and understand the differences in levels of radioactivity emits during any emergency or accident.

Those who are not appreciating and being thankful to the petitioners belong to the category of those who will always be unhappy and have low intelligence. That is all I can comment about such Pakistanis.

I think a project can not be started without the approval of EIA report. The anti-nuclear lobbies are using tactics to delay the Karachi nuclear power project. They think wind and solar are alternative option. These technologies have capacity factors from 12%-20% if we see world average data. By replacing nuclear power with renewable we have to install 4 times more capacity. Even then reliability of system can not be ensured. These type of barriers, delaying low carbon effective projects, will be combined to lead earth system to 6 degree C climate change scenario which will make disasters for developing world.

Conspiracy to make Pakistan energy starved country. No nuclear power, no coal power, no hydro power as they are danger to environment. These people will stop at nothing. Hoodbhoy should be exiled to USA where he belongs.