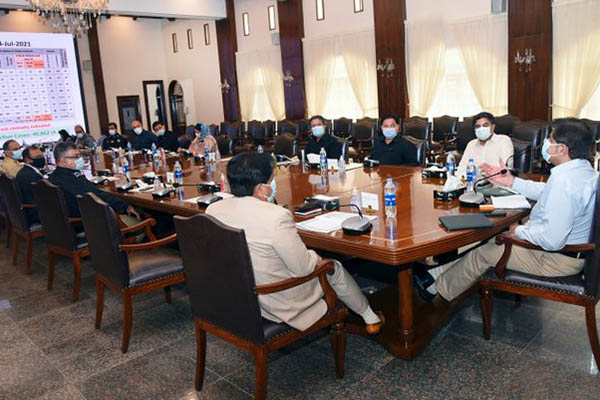 The Sindh government on Wednesday announced it was re-imposing several mobility restrictions to curb the spread of coronavirus and avoid a potential fourth wave of the pandemic.

In a series of posts by the Chief Minister’s House on Twitter, the provincial government said the decision had been taken during a meeting of the Provincial Task Force on Coronavirus chaired by C.M. Murad Ali Shah. It said the following restrictions were being re-imposed:

During the meeting, said the C.M.’s House, Shah reviewed statistics of coronavirus infections from the past eight days. He expressed concern over a failure to prevent the virus from spreading and sought information on contact tracing, especially details on whether the bulk of new cases had traveled into the province or had contracted the virus locally.

On Wednesday, Sindh’s positivity rate climbed to 7.4 percent against a national positivity rate of 4.17 percent. Shah said any positivity over 5 percent was a cause for concern and stressed that steps must be taken to prevent the virus from spreading further.

The government has repeatedly warned that a lax attitude toward SOPs and a slow vaccination drive have raised the risk of a fourth wave of the pandemic in the country. Despite this, the federal cabinet on Tuesday dismissed a recommendation of the National Command and Operation Center to announce 5 days off over Eidul Azha to curb people’s movement and opted to only offer 3 days off, raising fears among health experts that the virus could spread once again during the upcoming festival.