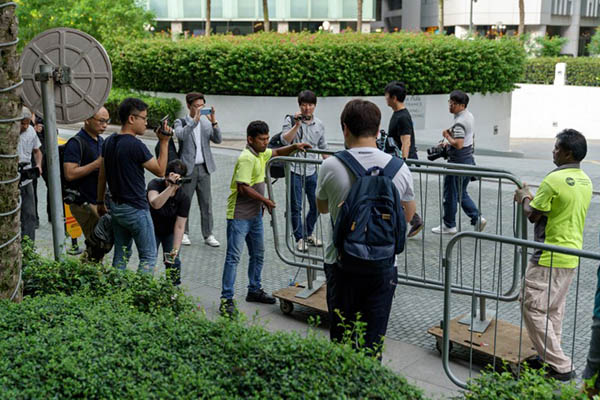 A media scrum ahead of the planned summit. Nicholas Yeo—AFP

Historic meeting planned for June 12 promises to lock down city

Singapore hotel rooms are being snapped up, police are preparing to lock down the city and thousands of journalists are set to jet in for the greatest media circus on Earth—the U.S.-North Korea summit.

Top officials are scrambling to salvage the historic meeting between President Donald Trump and the North’s leader Kim Jong-Un planned for June 12 in the city-state.

If the summit—already cancelled once by Trump before plans got back on track—does go ahead, then tiny, placid Singapore will be the unlikely ground zero for one of the biggest geopolitical events of recent times.

The delegations of U.S. and North Korean officials, along with their security details, are expected to be huge. But they are likely to pale in comparison to the gigantic media pack set to swarm the tropical city-state. Some 3,000 people are expected to apply for media accreditation, sources involved in planning the event who spoke on condition of anonymity told AFP.

It should easily eclipse the contingent of journalists at the last comparable event in Singapore, the 2015 meeting between Chinese President Xi Jinping and Taiwan’s then-leader Ma Ying-jeou. Hundreds of journalists witnessed that meeting.

There was a foretaste of the coming invasion this week as reporters camped out at the upscale Fullerton hotel to get a glimpse of Kim Chang Son, Kim’s de facto chief of staff, who is in Singapore to lay the ground for the meeting. Meanwhile top hotels rumored to be summit venues—the frontrunner is the five-star Shangri-La, where the Xi-Ma meeting took place—are almost fully booked.

But while world leaders hold their breath amid rising hopes a summit could lead to Pyongyang permanently abandoning its nuclear weapons program, some Singaporeans were more concerned about the potential disruption to their peaceful lives. Chang Anthony posted on Facebook that the meeting in the squeaky-clean city-state—calm and stable to the point of sometimes being mocked as boring—was “going to cause us inconvenience.”

“Can government declare a [public holiday] for this special day?” he asked. “Oh crap, two most unpopular leaders in the world coming here for world peace,” lamented Timothy Klein on the site.

Security will certainly be onerous, with large numbers of police set to be deployed and extensive road closures expected around the summit venue.

But Lim Tai Wei, a fellow at the National University of Singapore’s East Asia Institute, played down fears the event could cause widespread disruption. “You have to bear in mind that the country has the experience of hosting the Xi-Ma meeting in 2015, and also previously having hosted past U.S. presidents,” he told AFP.

While some may lament the sudden influx of media and diplomats, businesses see it as an opportunity. In a city famous for the “Singapore Sling” cocktail, watering hole Escobar is proving the country’s bartenders can still rise to the occasion with two special summit drinks.

The “Trump” is a blue, bourbon-based cocktail while the “Kim” is a red-colored cocktail with soju, a Korean liquor, as its base. Both cost Sg$12.60 ($9.40), a reference to the summit’s expected date.

The bar—named after drug kingpin Pablo Escobar—will also have a “U.S.-North Korea showdown” where customers who order a tray of 20 shots get to compete in a game of “rock, paper, scissors” while wearing gloves emblazoned with the countries’ flags.

And there is a special treat for weary summit participants. “If you can show that you’re a delegate attending the event, I’ll buy you a round of drinks on the house,” owner Stan Sri Ganesh told AFP.