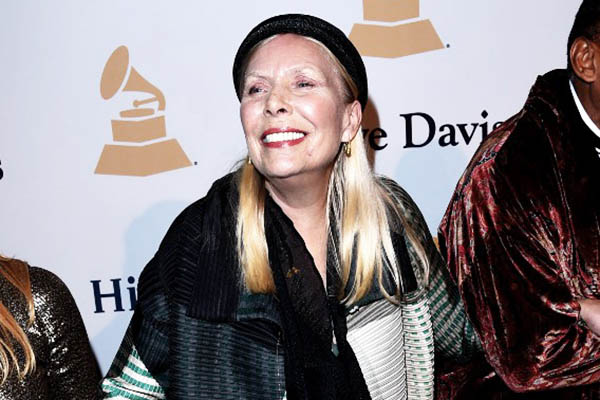 The celebrity was found unconscious at her home in Los Angeles.

Canadian singer Joni Mitchell, one of the symbols of the Woodstock generation, was in intensive care in a Los Angeles hospital on Wednesday, according to her website.

Mitchell, 71, was found unconscious in her home in the afternoon Tuesday but regained consciousness on the ambulance ride to a Los Angeles hospital, said a statement on her website. “She is currently in intensive care undergoing tests and is awake and in good spirits. More updates to come as we hear them. Light a candle and sing a song, let’s all send good wishes her way,” it added.

The news was broken by the celebrity website TMZ, which said emergency services came to the singer-songwriter’s house around 2:30 p.m. A representative of the singer did not immediately answer calls from AFP.

Mitchell, whose real name is Roberta Joan Anderson, is known for hits including “The Circle Game”, “Big Yellow Taxi” and “Help Me”, among many others. She was one of the top musicians to come out of the 1960s music scene, along with The Doors, Neil Young, Carole King, the Eagles, the Mamas and the Papas and Crosby, Stills & Nash. Other artists have done cover versions of her songs, including Prince, Bjork and Janet Jackson, the Los Angeles Times recalled.

She has received eight Grammys, the top prize in the U.S. music industry. She was also inducted into the Rock and Roll Hall of Fame in 1997.

Mitchell says she suffers from an ailment called Morgellon’s disease, which is described as a crawling, biting or stinging sensation all over the body. Some doctors say it is a real illness, while others call it a form of psychosis, whereby patients believe their skin is infected with parasites. “I have a tremendous will to live,” Mitchell told the Los Angeles Times in 2010.

The paper reported that in recent years she had been a vocal advocate for people who suffer from the condition. “I’m a polio survivor, so I know how conservative the medical body can be,” she told the Times. “In America, the Morgellon’s is always diagnosed as ‘delusion of parasites,’ and they send you to a psychiatrist. I’m actually trying to get out of the music business to battle for Morgellon’s sufferers to receive the credibility that’s owed to them.”

One of Mitchell’s best-known songs is “Woodstock,” a tribute to the huge, counterculture music festival held in upstate New York in 1969. It brought together an estimated 400,000 people and lasted three days. Mitchell had planned to perform at the festival, but huge traffic jams leading to and from the farm where it was held forced her to stay in New York for a TV engagement.

“So I stayed home in New York and I watched it on television all day and saw everybody there playing and singing. It was really a nice festival, I guess, from the looks of everything,” she told an audience at a concert in 1970.

Mitchell has performed the song herself, but it also became a big hit for Crosby, Stills, Nash and Young, as the folk group was known when accompanied by Neil Young.