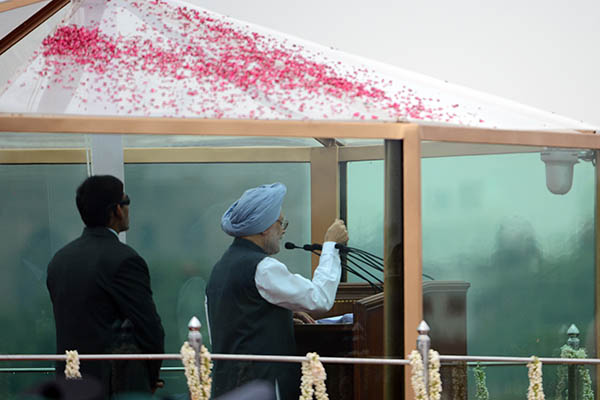 Indian prime minister says peace between neighbors can only be achieved if “anti-India” activity is prevented.

Indian premier Manmohan Singh warned Pakistan on Thursday against using its soil for “anti-India activity,” following fresh escalation of tensions between the nuclear-armed neighbors over a deadly attack on Indian soldiers.

“India has always strived for friendship with its neighboring countries,” Singh said during his annual address marking India’s independence day from the ramparts of the Red Fort in New Delhi. “However, for relations with Pakistan to improve, it is essential that they prevent the use of their territory and territory under their control for any anti-India activity,” Singh said.

The Congress prime minister was speaking from a bulletproof enclosure at the historic Red Fort, which had been turned into a virtual fortress with tens of thousands of security forces guarding against a possible militant strike.

Singh’s comments came against the backdrop of the killing of five Indian soldiers in disputed Kashmir last week that New Delhi blames on the Pakistan Army and which has stoked tensions between the neighbors.

The renewed tensions have cast a shadow over hopes of a resumption of stalled peace talks between the nuclear-armed rivals.

Since the killings, regular skirmishes have been taking place between the armies of the two countries along the heavily militarized Line of Control (LoC) dividing the Kashmir region.

The Independence Day address marks the end of British colonial rule in 1947 and partition of the subcontinent into India and Pakistan, a split that has caused endless tension and triggered three wars—two of them over Kashmir. The Muslim-majority region is divided between the two nations but both claim it in full.

India passed a resolution in parliament on Wednesday condemning what it termed as Pakistan’s “unprovoked attack” on its soldiers in Indian-administered Kashmir last week. Pakistan has denied involvement of its soldiers in the ambush, the deadliest such incident involving Indian soldiers along the LoC since the two countries agreed to a ceasefire in 2003.

The resolution followed a similar one passed in Pakistan’s Parliament a day earlier.

“It is unfortunate that Pakistan chose to indulge in such unprovoked attacks at a time when efforts were being made to establish a long-lasting framework of peaceful, friendly and cooperative ties …” the Indian resolution said.

Pakistan’s Prime Minister Nawaz Sharif pledged Wednesday to respond to the rising tensions in Kashmir with “restraint and responsibility.”

Rebel groups have been fighting Indian forces since 1989 for independence for Kashmir or its merger with Pakistan. The fighting has killed tens of thousands of people, mostly civilians.

Singh’s comments came after India’s mainly ceremonial President Pranab Mukherjee told Pakistan that “patience has limits” and all “necessary steps” will be taken to ensure internal security and protect Indian territory. “Our commitment to peace is unfailing but even our patience has limits,” Mukherjee said in a separate speech on the eve of India’s 67th independence day.