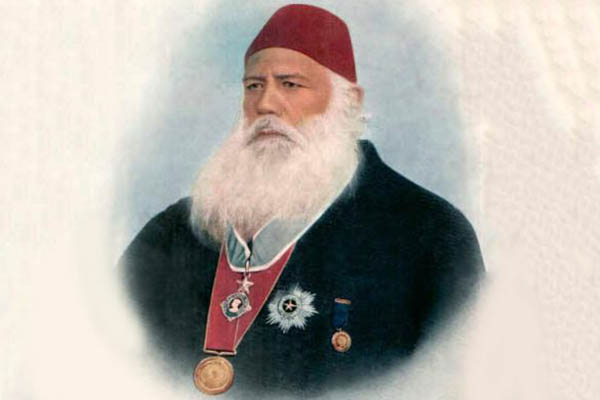 In today’s Pakistan, it is ideologically inadvisable for any citizen to be aware of the life and views of Sir Syed Ahmad Khan (1817-1898), despite the great man being one of the pillars of the Pakistan Movement. He didn’t agree with Shariat as we understand it today, favoring “reconstructing” Quranic law the same way as Allama Iqbal had been. He also spent his life as a faithful servant of the British Empire, believing that the 1857 War of Independence was nothing more than a criminal mutiny against British masters.

In an article published on Sept. 25, 2016, daily Express Tribune reported: “The Capital Development Authority took note that the Sir Syed Memorial Complex in Islamabad Sector G-5/1, was occupied by a fully-fledged university by the name of Center for Advanced Studies in Engineering in violation of the objective of the complex of buildings dedicated to Sir Syed Ahmad Khan.” For years the plot devoted to him lay vacant because no one in Pakistan was prepared to acknowledge Sir Syed’s achievement in the teaching of “modern” education to madrassa-going Muslims.

Last year, The Friday Times added to this news: “The Capital Development Authority (CDA) has sealed the Sir Syed Memorial Complex in the G-5/1 sector in Islamabad. The decision was made after CDA refused to extend the lease period. A letter with subject ‘Retraction of Plot 19 estimated at 11,666 yards allocated to Sir Syed Memorial’ noted that the rental arrangement had lapsed on Sept. 26, 2021.”

Why has Pakistan ignored Sir Syed in the 21st century? It may well be because he sought to overlay the religion-based worldview of Muslims with the “modernism” of work ethic. In 1836, Syed Ahmad Khan entered the service of the East India Company as a clerk in the judicial department. An honest and diligent worker, he soon made his presence felt and gradually rose to the position of a subordinate judge. Syed Ahmad Khan managed to find some time for literary work in the midst of his multifarious duties and edited the journal Aeen-e-Akbari with illuminating notes. A still more important work was Asar-e-Sanadeed, an archeological work on the buildings of Delhi which won him a membership of the Royal Asiatic Society. A popular magazine, Tehzeeb al-Akhlaq (Establishment of Ethic), worked to advance his more “radical” views.

As noted by Dr. Tassaduq Husain Khalid, writing in his book on Hali, a follower of Sir Syed: “During this period Syed Ahmad Khan acquired knowledge of English, though imperfect, and began to take a keen interest in educational matters. He found that the opposition which was being offered to the new ‘secular’ culture was futile and that it was bound to be disastrous in its results. He therefore, devoted himself to the task of opposing this resistance and started two modern schools, one at Muradabad and the other at Ghazipur.”

Sir Syed’s loyalty to the British

The 1857 Mutiny against Company Raj saw Sir Syed giving a practical proof of his loyalty to the British by securing the continued learning of the English language in his district at great personal risk. In recognition of his services, divisional commissioner of Banaras Alexander Shakespeare offered him the vast estate of Chandpur—which had been confiscated from a Syed family. However, Sir Syed had witnessed the sad plight of his ill-fated co-religionists and felt that he would be betraying his principles and glorying in the humiliation of his brothers-in-faith if he should yield to the temptation. He, therefore, politely declined the estate, saying that he had made up his mind “to migrate to Egypt.”

Sir Syed was subsequently transferred to Muradabad, where he found his community in a still worse situation. He felt that he would be a traitor and a coward if he sought personal comfort in a distant land and left his nation in that sad predicament. From then on, he dedicated his life to the cause of his nation and started with two well-reasoned pamphlets: “The Causes of Indian Revolt” and “Loyal Muhammadans of India.” The object was to remove the misgivings of the English about Muslims. These were followed by the foundation of the “Scientific Society” and the “British Indian Association,” with a view to developing mutual understanding between the ruler and the ruled by bringing them together. It was with the same objective that he wrote his famous and learned commentary of the Bible.

Sir Syed realized that Muslim antagonism to the new “rational” culture had no chance of success and that any further conflict would jeopardize the very existence of Muslims in India. Thus, he persuaded them to take a saner view of themselves in line with modem thought. But being a practical man, he was not prepared to break wholly and immediately with the past, and, therefore, proceeded to work out a new cultural equilibrium by grafting the new upon the old.

He grafted the “new culture” of secular behavior—and its corollary work ethic—on religion while imparting a Western secular education. He could not, however, ignore the religious needs of the students. He was still thinking of these plans when he got the opportunity, in 1869, to visit England and study English life and institutions in more detail. He was greatly impressed with all that he saw and his letters are an index of the admiration he developed for the English nation and the ideals it stood for. It became an article of faith with him that the rejuvenation of his nation was only possible with the acquisition of the virtues which had made the English great and progressive. These, he thought, could be attained through education; and he made up his mind to materialize his plans of a residential Muslim University on the pattern of Cambridge.

There is one definition of ‘character’ in the dictionary that we should look at more carefully. That word is ‘trust.’ Character is the quality that arouses trust. It is consistent and predictable. Trust is the fundamental condition of all commerce. Any society that engages in commerce will enjoy an environment of collective trust. How is trust developed? It is developed through what is called “work ethic.” Now work ethic has nothing to do with any religion. Its basic condition is contract and its realization comes from a predictable adherence to contract. Fulfilling a contract is the basic condition of trust. If a doctor promises to deliver a certain kind of service but actually delivers less than what he has promised, he is in breach of contract. He inspires little trust. He has no character.

Prior to the entry of the British Empire, Muslims in South Asia were primarily warriors and rulers, while Hindus were engaged in commerce. A warrior has no need to adhere to a contract. He seeks conquest and thereafter imposes his will on others. If you are looking for a society of trust you will not find it among Muslims. That is not to say that Muslims in South Asia have not engaged in commerce. But before 1947, commerce and finance were overwhelmingly in the hands of Hindus. At one point, when the Muslim League thought that Muslims too should become shopkeepers, the experiment failed because customers lacked the requisite trust in them, believing them too “temperamental.” The Muslim League had to eventually give up the program of making shopkeepers out of warriors.

After Max Weber (1864-1920) wrote The Protestant Ethic and the Spirit of Capitalism in 1904, the word “ethic” lost all abstraction; it now meant “work ethic,” that is, a man’s relationship to his work and the contract under which it is performed. For example, if you are selling tablets and saying 100 tablets on the bottle then there must be exactly 100 tablets inside the bottle. That is your contract; and ethic is attached to contract. The Muslim focus today is by and large concentrated on worship and not on ethic, which leads to the formation of a hypocritical society where the market remains perennially uncertain because of perceived dishonesty. Not that Islam doesn’t teach ethic: The Quran tells us of a “nation of Prophet Shuaib” that was destroyed by Allah because “it did not measure honestly” in the marketplace.

Allah says in the Quran: “Do you know what haawiyah is?” Then He says: “You don’t know.” In the Quran, Hell is described in seven categories. In this gradation of seven hells, jahannum is not the most frightening. In fact it is number six in intensity. The most painful hell is haawiyah. Who will burn in haawiyah? Interestingly, those who don’t abide by the work ethic. It will be mostly dishonest businessmen. Needless to say, haawiyah would be populated with the types of Muslim businessmen who have completely replaced work ethic with worship. There is a message in the character of Islam’s Prophet which is just as exemplary before the message of Islam as well as afterwards. Today, the definition of character that most suits us is the one derived from his pre-Islamic career.