Situating the Dream in Reality 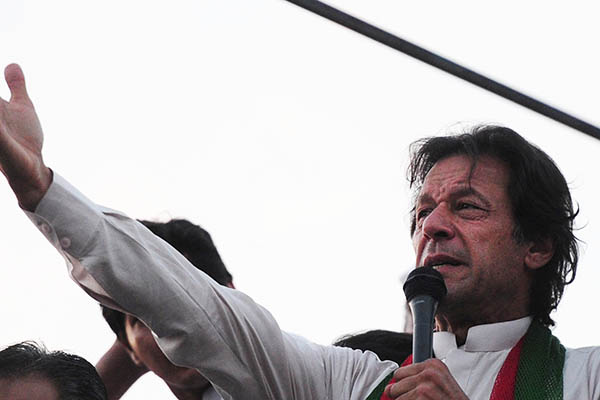 Imran Khan would do well to remember that policymaking and reform is a lengthy process that is seldom achieved through rash actions.

Let’s begin with some assumptions. For instance, let’s say that Imran Khan is entirely altruistic, that his only concern is with changing Pakistan for the better; let’s also assume that his desire to become prime minister is fired not by any personal ambition but because he thinks that he couldn’t do what he wants to do without that office.  Let us now assume that the election was rigged to an extent that without such rigging the ruling Pakistan Muslim League (Nawaz) would not have come to power. (Let’s not quibble over whether Khan’s Pakistan Tehreek-e-Insaf would instead have won.)

Step two, now that we have made some assumptions, should be about some facts. The people of Pakistan, outside of those with overtly partisan leanings, are not a happy lot. This country has been, and is being, misgoverned. Here, the rule of law is a concept much talked about but nary practiced. The powerful can manipulate the system while the commoners despair of justice. There are other facts also but for now these basic ones will suffice.

Let us now juxtapose our earlier assumptions with these facts. This is how the proposition will go: Khan is out on the streets and prepared to storm the system and its symbols because the system and the symbols are meaningless unless the state can provide to its citizens what the Constitution, at least in letter, grants them. In other words, Khan is prepared to hold the Constitution in abeyance for a while until he can restore to it [Constitution] its spirit.

This is an interesting proposition, especially if seen in light of Agency Theory. Peter Feaver invoked the principal-agent framework in trying to understand military coups. This is how it goes:

Coups, including the well-intentioned, subvert the principal-agent framework, which is grounded in the primary and secondary orders of agency. The primary agency is what the people give to their elected representatives and in whose name the governments exercise it. The secondary agency, also called the administrative agency, is what the civilian principals grant to government functionaries.

While Khan is not a military general and is in fact a beneficiary of the very system he has challenged, his proposition to set aside the Constitution and the organizational framework under that document in order to restore it to its spirit comes dangerously close to the argument of a coup-maker.

The problem is that subverting the principle-agent framework creates major structural problems. This is something we witnessed during the 7-year period of General Pervez Musharraf and it forms the motif of all coups. One of the obvious questions is: can such an activity have a limiting principle? Put another way, who will decide who can resort to this and to what extent? Say, for instance, Khan becomes the prime minister and someone else does the Khan on him, using the same arguments. Will the one who comes after Khan be any less legitimate in his demands than Khan is today? Will the legitimacy or otherwise of the second agitator’s demands be decided by Khan or the agitator?

Another obvious problem would be the place of the Constitution in any action, intentions notwithstanding, that thrives on means outside the Constitution while vowing to defend the very document it sets aside in the first phase.

But let’s not nitpick. Let’s add some more assumptions. Let’s assume Khan is not setting a precedent; let’s say he is right in doing what he is doing, that extraordinary circumstances call for extraordinary measures, that he has a tryst with destiny. He is now the prime minister. He must now set the agenda, that agenda being changing Pakistan. After all, that is what it is all about; that is his slogan.

Can he do it? Does the complexity called Pakistan lend itself to pious wishes? Is policymaking a linear exercise, “a system of equations whose variables can be plotted against each other as a straight line”? Is a complex society akin to a linear system with its two essential properties of proportionality and additivity, the first demanding that changes in system output must be proportional to changes in system input and the second requiring that the whole must be equal to the sum of its parts? If a society is indeed like a linear system, we can break it up “into smaller pieces that, once solved, can be added back together to obtain the solution to the original problem”.

But what if it is not? What if a society is like a nonlinear system which violates the essentials of proportionality and additivity, where the whole is greater than the sum of its parts and where small variables can lead to large outputs and add to the instability inherent in nonlinear systems? I am not a mathematician but I know that the distance that discipline has travelled from classical mathematics to nonlinearity is a long one.

But let’s return to policymaking. A bevy of scholars have studied how policymaking works and what pitfalls await it. In other words, they have talked about the limits of public policy. Just like power projection is more about knowing the limits of one’s power, sound policymaking must appreciate the limits of what can be achieved. This is important also because the not-so-implicit suggestion in all reformist agendas relates to final solutions. That somehow X can get to what Y couldn’t and that is a place offering, to quote Keats, ‘honey wild and manna dew’, only to find, a few years down the line, that the dream had left the knight ‘alone and palely loitering’.

So, does this mean nothing can be achieved? No. Only that we can achieve, bit by bit, and through a long haul as opposed to the romance associated with taking a leap and doing the Dew. The immediacy of circumstances forces us into desperation. We look for quick fixes, even if that means going outside the Constitution. But we have travelled those paths before and found that they led nowhere. There’s no reason to believe they will, now.

Read your article. The gist of your arguments, as i understood, is as below along my queries (Q) and esponses (R):

1) IK has put ‘constitution in abeyance’ to bring it back to its true spirit. Q: Please refer the articles in the constitution which he is violating.

2) Change will come through sound policymaking which takes time. (Q) Absolutely agreed. But let’s never ever forget the context where we are applying our theories. Policymaking and implementation will start when the head of states and institutional power has the will to bring positive change. I QUESTION the basic intentions of our political class who don’t have this intention. So let’s cut the policy making jargon and rhetoric, first address the INTENTION …how to chk or administer that: mal-intentions towards state and its ppl should be punished. Period

3) Me n You are sitting analyzing political moves on electronic media and some people are actually trying to standup against atrocities. Don’t discredit them.

A very logical analysis of an illogical political move… No wonder I always enjoy Ejaz Haider.

The difference Zara is that its actually not a political move; its an attempt to challenge the political mindset of this country and credit goes to IK that your PM has finally started attending parliament sessions. Its a genuine effort to take the status quo head on. And its an effort to be proud of. Mistakes have happened but the intent n motivations are clear n straightforward.