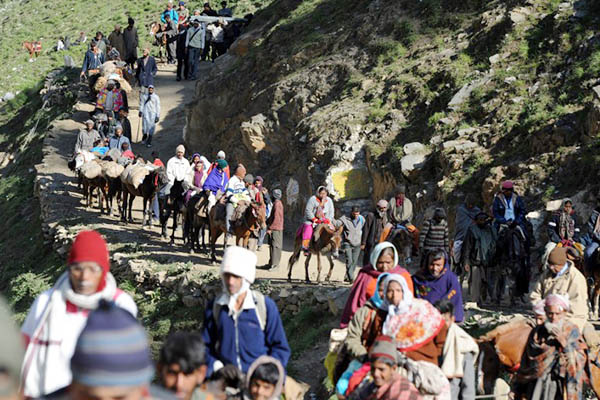 Militants killed six Hindu pilgrims and wounded 14 others on Monday in India-administered Kashmir, police told AFP, after their bus came under attack.

India’s Central Reserve Police Force, which provides security for the two-month long annual pilgrimage, said gunmen first opened fire on a security checkpoint but no injuries were reported. “Militants further attacked the pilgrims’ bus at Batingu (six civilians killed and 14 injured) and escaped towards Arwani,” the CRPF said in a statement.

The police force added the pilgrims were from the western Indian state of Gujarat.

A New Delhi based security official, speaking anonymously, told AFP that security personnel were exploring “all the angles including suspected Islamists.”

Hundreds of thousands of Hindu pilgrims trek over mountain trails to reach Amarnath caves, around 3,900 meters above sea level, in India-administered Kashmir every year. The devotees worship the natural ice formation at the caves as a symbol of Shiva, the Hindu god of destruction.

“Pained beyond words on the dastardly attack on the peaceful Amarnath Yatris [pilgrims] in Jammu and Kashmir,” Prime Minister Narendra Modi said on Twitter. “India will never get bogged down by such cowardly attacks and the evil designs of hate,” Modi added.

The pilgrimage has previously been the target of militants, with more than 30 pilgrims killed in 2000. The state’s former chief minister Omar Abdullah urged “every right thinking Kashmiri” to “unequivocally” condemn the attack. “This is a moment for us to define ourselves. Are we willing to … take a stand. No terror and murder in our names,” Abdullah tweeted.

Kashmir, divided between India and Pakistan since 1947, is one of the most heavily militarized spots on earth with a long history of conflict. The mountainous region is home to dozens of armed groups fighting for independence or a merger of the territory with Pakistan.

Mirwaiz Umar Farooq, head of All Parties Hurriyat Conference, a political coalition opposed to the Indian rule of Kashmir, also condemned the attack. “As the unfortunate news of the Yatris killing reaches us leadership and people of Kashmir are deeply disturbed and saddened and strongly condemn it,” Farooq said on Twitter.

Jammu and Kashmir, India’s only Muslim-majority state, has since 2014 been governed by the pro-India People’s Democratic Party in an unpopular coalition with Modi’s ruling Hindu nationalist Bharatiya Janata Party. Analysts say this has intensified public opposition to Indian rule in Kashmir.

Tensions have also been high around the first anniversary of the death of charismatic rebel leader Burhan Wani, who was shot dead by security forces on July 8, 2016. The death of the 23-year-old, who had built up a big following on social media, sparked a huge outpouring of grief in the Valley.