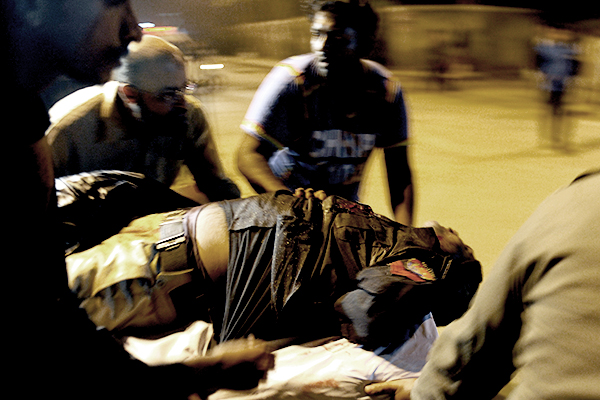 An injured policeman being moved to hospital, Jan. 25. Rizwan Tabassum—AFP

No one has yet claimed responsibility for the killings.

In two separate incidents on Saturday night in Karachi, six policemen were shot dead by assailants astride motorbikes.

“At least six policemen were killed when unknown gunmen on motorcycles fired at their patrol vehicles with automatic weapons and threw a hand-grenade at one vehicle,” said senior police official Munir Shaikh. The attackers targeted two police patrol vehicles at separate locations in the Landhi neighborhood, he said.

No one has yet claimed responsibility for the killings.

Karachi is the scene of a limited mop-up operation against criminal elements, including Taliban and Al Qaeda militants. Earlier this month, the Taliban killed one of the city’s top antiterrorism police officers, Chaudhry Aslam, by ramming an explosives-laden car into his convoy.

The day before the killing of the policemen, Sindh saw a spate of hand-grenade attacks—some 18 of them—in Larkana, Jamshoro, Bhit Shah.

Karachi is Pakistan’s largest city and accounts for 42 percent of Pakistan’s GDP.