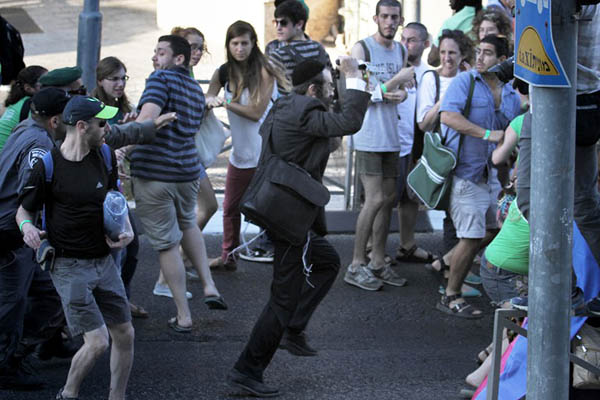 Police claim they provided a large deployment to protect the event, but the assailant still managed to break through.

An ultra-Orthodox Jew allegedly stabbed six Gay Pride marchers in Jerusalem on Thursday, gravely wounding one of them, just weeks after completing a 10-year sentence for a similar attack, police and medics said.

The assault occurred in Jerusalem’s city center, with witnesses describing terrifying scenes of an assailant, dressed in ultra-Orthodox garb, storming the parade with a knife. The man was quickly arrested amid pandemonium at the scene, but the parade and its hundreds of marchers pushed ahead defiantly afterwards, even with blood on the road.

A police spokesman identified the suspect as Yishai Shlissel, who was released from jail three weeks ago after having served his sentence for wounding three marchers in an attack in 2005. Media reported that Shlissel had posted a letter on the Internet speaking of the “abomination” of a Gay Pride parade in Jerusalem.

Television also broadcast extracts of an interview that he was said to have given to a radio station about 10 days ago in which he said “the fight continues against those who defile” God.

With questions being raised over whether authorities had adequately protected the march, a police spokesman said a large deployment had been assigned to the event.

One of the victims, a woman, was in “very serious condition,” while two others were less seriously wounded, according to Magen David Adom, the Jewish equivalent of the Red Cross. Three others were lightly hurt. At least two of those attacked were said to be men.

“In Israel everyone, including the gay community, has the right to live in peace, and we will defend that right,” Netanyahu said in a statement.

Israel’s two chief rabbis also strongly condemned the incident, and the premier said he welcomed the “religious leadership’s condemnation of this terrible crime” and called “on all those in positions of leadership to denounce this contemptible act.”

One woman, who was in a nearby grocery store when the attack occurred, spoke of a chaotic scene. “All of a sudden, somebody came in and screamed, ‘Somebody has a knife and is stabbing some people!’” said Sharon Liebman, 51. “I saw three people on the ground, two males and a female.”

She said the men appeared less seriously wounded than the woman, who was “bleeding profusely.”

Michael Rosner, 22, who had come from London for the parade, said “I saw the guy with the knife running. I saw the blood on the pavement.”

After police arrested the assailant, marchers carried on through streets decked with rainbow flags to a park where a party was planned for the evening. One leader of the gay community in the city, Tom King, denounced “the hate campaign in Jerusalem” and accused officials of doing little to counter it, while saying he hoped the attack would galvanize authorities into action.

Hundreds of police had been deployed to prevent violence breaking out in the highly conservative city during the annual march. In past years, ultra-Orthodox protesters have gathered in their Mea Shearim bastion to denounce homosexuality.

Israel’s homosexual community was plunged into grief in 2009 when a gunman attacked a center for young gays in Tel Aviv killing two people and wounding some 15 others. That assailant has never been apprehended.

Israel is widely seen as having liberal gay rights policies, despite the ultra-Orthodox hostility towards homosexuals, particularly men. The Jewish state repealed a ban on consensual same-sex sexual acts in 1988.