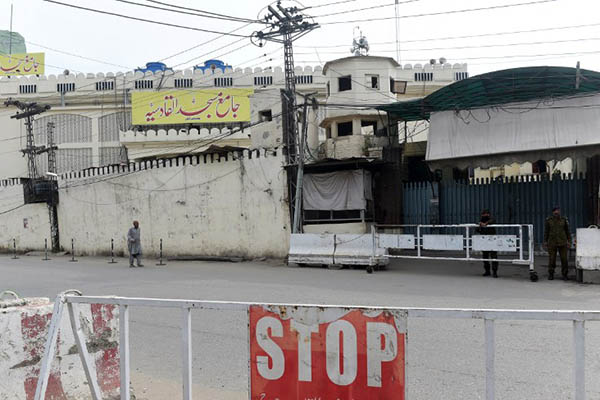 Policemen guard the headquarters of the banned Jamaat-ud-Dawa following its closure by authorities in Lahore. Arif Ali—AFP

At a mosque on a quiet Islamabad street, any reference to the U.N.-listed terror group which runs it has been removed as Pakistan—once again—comes under pressure to demonstrate its sincerity about eliminating militancy.

The first wave of militant detentions was announced by Islamabad on March 5, as tensions were still cooling between India and Pakistan after their latest confrontation over the disputed Kashmir region.

New Delhi has long accused Islamabad of harboring militant groups, which it says are used by Pakistan intelligence agencies to attack India. The Feb. 14 suicide blast in India-Occupied Kashmir—claimed by Pakistan-based Jaish-e-Mohammad but perpetrated by a local separatist—is the latest example, and the attack which ignited the recent crisis between the nuclear-armed neighbors.

Since March 5, Pakistani authorities have arrested hundreds of suspected Islamist militants and shuttered more than 700 madrassas, mosques, and clinics linked to banned groups.

Mosques like the Al-Quba mosque visited by AFP in Islamabad—which is run by Jamaat-ud-Dawa (JuD), seen by the U.N. as a charity front for an anti-India militant group—have had all signs announcing their links to such organizations removed. Instead, a green sign clinging to a post proclaims the new management of the premises by the “Government of Pakistan.”

“This government will not allow Pakistan’s land to be used for any kind of outside terrorism,” vowed Prime Minister Imran Khan earlier this month. But the crackdown is reminiscent of previous efforts, and Pakistan has yet to convince the international community that their latest thrust is sincere.

Cracks have already begun to emerge after Pakistan’s longtime ally China this week blocked measures by the U.N. Security Council to blacklist JeM leader Masood Azhar. It was the fourth time China has blocked such attempts, reinforcing suspicions that it was acting on Pakistan’s behest. If so, observers said, the move undermined the sincerity of the crackdown.

Had Azhar been blacklisted, Pakistan would have been morally compelled to halt his activities, a Western diplomat said. “Is Pakistan just trying to fool us?” the diplomat asked. “I would say yes.”

The crackdown has largely targeted JeM along with JuD, which is linked to Lashkar-e-Taiba, the group accused by India and Washington of masterminding the terrorist attacks in Mumbai in 2008.

Shuttering groups like JuD—which provides widespread and vital services like healthcare to poor communities in a developing country where government-run social services are sorely lacking—risks a potential backlash. “We were ordered to close the health centers and give our ambulances to the authorities,” said Akbar Khan, a JuD official based in Peshawar. “Our leaders asked us to accept everything and to keep a low profile,” he added.

A source close to JeM said the ongoing operation was unprecedented in its scale. “Almost the entire leadership of JeM has been detained, all the clerics and head clerics have been replaced and administrative control of all our mosques have also been taken over,” said the source. “We have never seen such harsh steps in past.”

However the operation mirrors similar crackdowns on militants, such as after attacks on the Indian parliament in 2001 and in Mumbai in 2008. Then, extremists were also detained—only for many to be released later, and the groups allowed to continue their activities, both militant and charitable.

Pakistan has also not yet demonstrated its willingness to go any further than detentions and closures. “Closing major infrastructures is a very important step, but it doesn’t show that the whole network has been dismantled,” said analyst Huma Yusuf, a fellow with the Washington-based Wilson Center. “There are still thousands of militants in the country. What do you do with them? A peace and reconciliation process? A de-radicalization plan? Anything? Right now, there is nothing.”

The crisis also comes as Pakistan is facing possible sanctions from the Financial Action Task Force—an anti money-laundering monitor based in Paris—for failing to rein in terror financing. The organization will soon decide whether to add Pakistan to a blacklist that would trigger automatic sanctions, further weakening Pakistan’s already faltering economy.

Analysts fear even those headwinds may not be enough to convince the Pakistani intelligence agencies to cut their alleged ties with militants. “Why would they give away something that they have created, nurtured and defended for 30 years?” said author Myra MacDonald, a researcher specializing in Pakistan. “There is a concern that if you hit them too hard, they will hit the Pakistani state back.”