Home Lightbox Sleepwalking to Another Surrender

Sleepwalking to Another Surrender 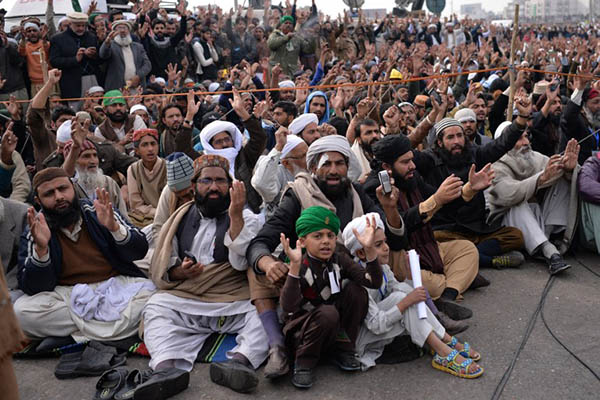 Besieged on multiple fronts, the government took the easiest path to resolution

One of the biggest lockdowns in the history of Pakistan—from Nov. 5 to Nov. 26—ended after the director general of the paramilitary Punjab Rangers, Maj. Gen. Azhar Naveed Hayat, parleyed with the agitating leaders of the rightwing Tehreek-i-Labaik Ya Rasool Allah in Islamabad and convinced them to end what increasingly looked like an intractable uprising. Earlier, Army chief General Qamar Javed Bajwa had met Prime Minister Shahid Khaqan Abbasi and refused to deploy any troops against the protesting mob while advocating a ‘peaceful’ resolution to the conflict.

All the major cities of Pakistan were brought to a standstill by the protesting Barelvi mullahs. It was an unprecedented show of force by a sect usually understood to be quietist and apolitical. It arose over a hastily abandoned amendment to Pakistan’s election law, which the Labaik protesters alleged was tantamount to blasphemy. The only difference between the original text and the amended version—since discarded—was the replacement of “I solemnly swear” with “I solemnly affirm.” The Labaik group, led by Khadim Hussain Rizvi, accused law minister Zahid Hamid of the offense even though it had been approved by representatives of all the political parties currently in Parliament. Never one to miss an opportunity, a majority of local broadcasters, implicitly or explicitly, backed Labaik and attacked a government already under siege from the opposition as well as the Army still stinging from an October 2016 newspaper report claiming then-P.M. Nawaz Sharif had blamed military actions for diplomatically isolating Pakistan.

When the government finally took action against the Rawalpindi-Islamabad sit-in on orders from Islamabad High Court, it was quickly defeated as the “dharna” was more organized than most people thought. The agitators were regaled with generous quantities of food—origins unknown—and had plenty of shelter in the form of tents and bedding. The mob was also armed with guns and grenades whose provenance the state intelligence agencies claimed to be unaware of. With all the main cities paralyzed, the prime minister knew his government was finally licked. He finally asked the law minister to resign—which he did. The government, which began by likening the Labaik sit-in to the 2014 siege of Imran Khan organized by some officers of the Inter-Services Intelligence, ended up submitting to another reversal with half-a-dozen of its leaders threatening to resign from the National and Punjab assemblies.