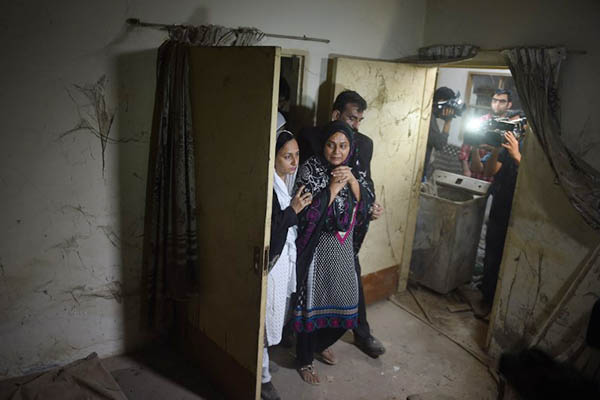 Asma Nawab returns to her house in Karachi for the first time since her release. Rizwan Tabassum—AFP

Nawab was just 16 years old when someone slit the throats of her parents and only brother during an attempted robbery at their home in Karachi in 1998. With the killings dominating headlines, prosecutors pushed for swift justice in a 12-day trial that ended with a death sentence handed to Nawab and her then-fiancé.

The next 20 years were “very painful,” Nawab, now 36, says tearfully. At first the other inmates were skeptical at her protests of innocence, but eventually she formed a new “family” of women—some convicted of kidnappings, others of murders.

They supported one another when progress on their cases was poor, or family neglected them. “We would cry on Eid and other festivals… It was very painful. I would feel it intensely” when relatives failed to visit, she said through sobs. “Only once my uncle came to see me.”

Though her trial was speedy, her appeal moved at a glacial speed through Pakistan’s creaky justice system. It was not until 2015 that her lawyers petitioned the Supreme Court, which—after a three-year hearing—ordered Nawab released due to lack of evidence last month. “The verdict of this case was given in 12 days but it took 19 and a half years to dispose of the appeals,” her lawyer Javed Chatari told AFP. Nawab said the acquittal left her stunned. “I really couldn’t believe it,” she said.

The verdict left her “perplexed,” she said, and she struggled to understand what would come next. “How would I face the world after living so long in jail?”

Stories like Nawab’s are common in Pakistan, where the judiciary lacks the capacity to cope with the country’s surging population and an expanding caseload, resulting in a mammoth backlog. In 2017 alone, there were more than 38,000 cases pending in the Supreme Court in addition to hundreds of thousands awaiting trial across the judiciary, according to a Human Rights Commission Pakistan report released in April.

Rampant corruption in Pakistan’s police force also means the wealthy are able to bypass the law, while deep-seated patriarchy means women in particular face an uneven playing field in the justice system.

“Unequal power structures allow for people with advantage—money or power—to rise above the law. For the poor, the system is sluggish and sometimes is so weak that it is safe to label it as almost non-existent,” said lawyer Benazir Jaoti, who specializes in women’s legal and political empowerment in Pakistan. “Within the system, women are one of the groups of people that are significantly disadvantaged, it being a patriarchal society and a patriarchal system.”

Even when the system finally comes through, as it did with Nawab’s acquittal, that is usually as far as it goes, leaving those whose lives have been dismantled to repair the damage with little or no support.

Nawab has had little to return to since leaving Karachi’s central prison in early April. With her loved ones dead, her family house was looted then fell into disrepair.

Any potential compensation from the state will take time to process, her lawyer admits, acknowledging there’s a high chance she will receive nothing. In the meantime, she is unemployed.

During her first visit back to her humble family home she quietly wept as her lawyer broke the gate’s lock with a hammer. “[The police] left nothing behind,” she said after walking through the dilapidated house covered in dust and cobwebs. “I lost my parents and now I see none of their belongings.”

Nearly two decades after being convicted, Nawab still holds the media as much as the courts responsible for her treatment, saying she was unfairly portrayed as the culprit in the murders, including in a TV drama based on the case.

Although she has been exonerated, her release has done little to change the public narrative. Persecution persists, Nawab says, with people in the streets frequently whispering cold remarks when she walks past.

“Society will not accept the verdict,” agreed Supreme Court lawyer Mohammad Farooq, commenting on the case. “She cannot get rid of this stigma as far as society is concerned.”

But Nawab says she must move on and has plans to finish her studies and find a job. She has also vowed to raise awareness for other wrongly imprisoned women. Her lawyer says he will help her set up an NGO to give women like her the support she never had. “I don’t want any other woman to have to endure the ordeal that I lived through,” says Nawab. “So I will raise their voices for them.”