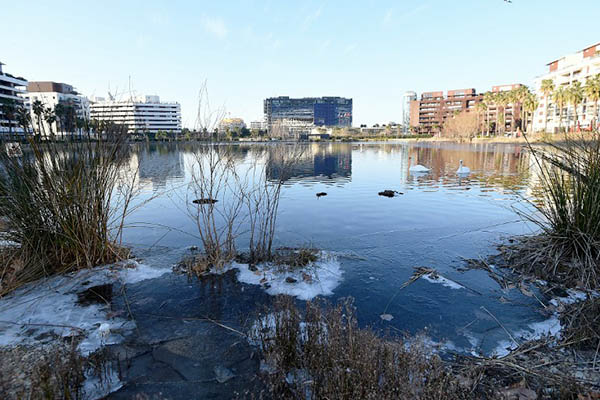 New study finds natural ponds eventually lose ability to soak up CO2 and give off even more of methane.

Tiny natural ponds pose an overlooked danger for speeding up global warming, according to a study published on Monday in the journal Nature Climate Change.

In experiments designed to simulate moderate future warming, scientists in Britain found that such ponds—a meter across—gradually lose the capacity to soak up one kind of greenhouse gas and give off even more of another.

After seven years at higher-than-ambient temperatures, “the ability of the ponds to absorb carbon dioxide was reduced by almost half, while methane release nearly doubled,” said lead-author Gabriel Yvon-Durocher, a professor at the University of Exeter. “Both those trends became amplified over time,” he said.

With soil, by contrast, warming initially stimulates CO2 output but then causes it to taper off.

The new findings matter because small ponds play an outsized role in the planet’s carbon cycle—the balance between input and output of greenhouse gases. While covering only a tiny fraction of Earth’s surface area, they are responsible for about 40 percent of methane emissions from inland waters, earlier research has shown.

Methane is about 28 times more effective in trapping the sun’s radiation in our atmosphere than carbon dioxide, the dominant greenhouse gas. “Our findings show that warming can fundamentally alter the carbon balance of small ponds over a number years,” Yvon-Durocher said. “This could ultimately accelerate climate change.”

Scientists working on the next major U.N. scientific report on climate change—scheduled for 2020—should take note, he added. “Up to now, the Intergovernmental Panel on Climate Change (IPCC) models do not take into account the amplification effects of warming on these aquatic ecosystems.”

The main source of man-made carbon pollution is the burning of fossil fuels, accounting for more than 70 percent of global greenhouse gas emissions. The rest comes from deforestation, the livestock industry, and agriculture.

In the Paris Agreement climate treaty, the world’s nations have vowed to hold global warming to under 2 C (3.6 F), a goal that some scientists say may be out of reach.