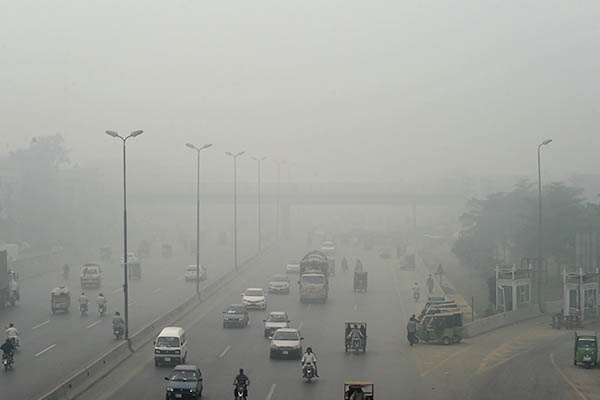 A primer on how to survive the smog plaguing the capital of Punjab province.

For the past two days, a gray-toned haze that puts most Instagram filters to shame has obscured the city of Lahore and its surrounding areas. Caused by smog—a toxic mixture of fog, pollutants, dust particles and climate change-induced weather patterns—the decidedly unhealthy ambiance will likely persist in Lahore for another week.

“Lahore might get its first, but very short, spell of rain after maybe seven days,” says Dr. Ghulam Rasool, the director general of the Pakistan Meteorological Department. “However, such murky weather is likely to continue in Punjab for the next two months, due to the less than normal rainfall forecasted. Eventually, the smog will convert to fog,” he told Newsweek.

This is bad news for residents of Pakistan’s most populous province, many of whom have already started noticing shortness of breath, itchy eyes and a rise in viral infections.

Speaking to Newsweek, health experts and pulmonologists recommended installing air filters in homes and offices to combat the pollution. These are pricey precautions (ranging from Rs. 60,000 to Rs. 100,000 each), however, and for those on a limited budget, the following measures can prove an equally effective, if less extensive, barrier to the toxic atmosphere:

Avoid the outdoors Until the next spell of rain, stay inside as much as possible. Health enthusiasts should exercise indoors or after dark when reduced emissions from vehicles and machinery can lessen the suspended pollutants

Cover-up Use surgical masks or handkerchiefs to cover your nose and mouth before heading outside. There are multiple options available at most medical stores and if you don’t want to step outside, you can even have them delivered to your doorstep through online pharmacy Sehat (phone: 0311-11 SEHAT)

Windows shut When commuting on a motorcycle, wear a helmet and goggles. For motorists, it is recommended they keep their windows firmly shut during all incursions

Cooler air Despite the cooling weather, resist the urge to turn off your air conditioners. Instead, turn off your ceiling fans and try to utilize ACs and their limited air purification as much as possible

Green is key Move a few plants into your house to help filter the smog and carbon dioxide in the air. Aloe Vera, Spider Plants and Chinese Evergreens are among the most easily available and recommended air-purifying plants

Hydration Drink lots of water throughout the day. This is especially pertinent for children and those feeling unwell

Inside and out If you are coughing or sputtering, gargle a few times with salty water to dislodge any embedded pollutants. If the coughing persists, consider using a nasal blockage inhaler for speedy relief

Stay prepared Smog tends to be an excellent medium for disease so get those flu shots. These are especially advisable for children under-five as they are most at risk