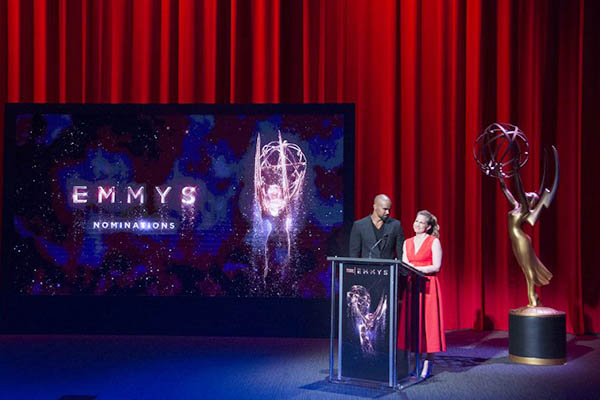 The NBC series led the field along with HBO’s sci-fi western Westworld for television’s version of the Oscars. It also broke its own record for total nods since the awards began, boosting that number to 231.

Alec Baldwin was nominated for his zinging portrayal of POTUS himself, as was Melissa McCarthy for her “Unhinged Spicey” routine as under-fire White House press secretary Sean Spicer. On a triumphant morning for SNL, the Academy proved itself to be bipartisan, however, handing Hillary Clinton impersonator Kate McKinnon another nod in the comedy supporting actress category that she won last year.

While Baldwin’s turn as a pouty, insouciant Trump has won almost universal acclaim, the president himself has remained steadfastly unimpressed. “Watched Saturday Night Live hit job on me. Time to retire the boring and unfunny show. Alec Baldwin portrayal stinks,” the tweet-happy chief executive opined a month before the election.

Baldwin is widely seen as a shoo-in in for best supporting actor in a comedy show, while McCarthy is the favorite for best guest actress, but faces competition from Star Wars legend Carrie Fisher, who would be a poignant posthumous recipient. Vanessa Bayer, Leslie Jones, Kristen Wiig, Lin Manuel Miranda and Tom Hanks were also nominated for supporting or guest appearances on the series.

Stranger Things, Netflix’s award-winning sci-fi-horror drama set in the 1980s, and FX’s Feud: Bette and Joan, about the famous rivalry between Joan Crawford and Bette Davis, scored the next highest tallies with 18 nods.

Another political comedy, HBO’s Veep—starring Julia Louis-Dreyfus as hapless former president Selina Meyer—score 17 nominations for the Emmys, to be handed out on Sept. 17 in Los Angeles.

Industry watchers had predicted a wide-open race, with awards juggernaut Game of Thrones out of the running—and that prediction was borne out.

HBO’s fantasy epic about noble families vying for control of the Iron Throne raked in a record-breaking 12 awards last year, but was ineligible this time around since the new season doesn’t start until Sunday.

The Crown—a Golden Globe winning series about Britain’s Queen Elizabeth II—is generally thought to be the favorite for the Emmy, but will face stiff competition from returnees Better Call Saul (AMC) and House of Cards (Netflix).

“The wealth spread to newbies reflects the breadth of programming that Emmy voters had to choose from and a clear desire by voters to inject fresh blood into the realm of shows considered Emmy-worthy,” said Cynthia Littleton, Variety magazine’s managing editor for television.

Some hotly tipped shows missed out on widely-expected nods, however, including Homeland and Mr. Robot, which were shut out of the best drama category. Though its stars Keri Russell and Matthew Rhys got nominations for their acting, FX spy drama The Americans was also denied a spot in the coveted race in its penultimate year.

The Television Academy’s 21,000 members were given two weeks in June to sift through a crowded field of some 8,000 entries from shows aired during the previous 12 months across 113 categories. The most star-studded category was best actor in a limited series or TV movie, with the nominations led by Robert De Niro, who anchored HBO’s The Wizard of Lies as Ponzi scheme fraudster Bernie Madoff.

In the best actress in a comedy category, Louis-Dreyfus will be hotly-tipped for a sixth consecutive Emmy.

Game of Thrones made television history last year, becoming the most decorated fictional show since the awards began nearly seven decades ago with nine awards in technical categories and three top prizes. Second round voting for this year’s prizes will take place in August while the ceremony itself will be beamed live from the Microsoft Theater in Los Angeles, with late night funnyman Stephen Colbert hosting.