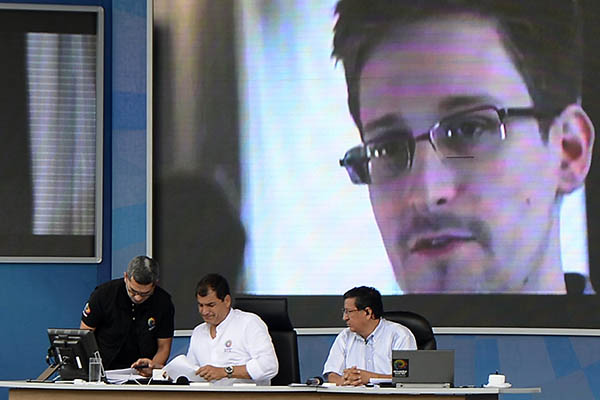 Whistleblower is seeking asylum in 21 countries, including India, China, Switzerland.

Snowden, who is holed up at Moscow’s Sheremetyevo Airport, accused President Barack Obama of ordering Vice President Joe Biden to pressure leaders of countries where he was seeking asylum.

“These are the old, bad tools of political aggression,” he said in a statement published Monday by WikiLeaks. “Their purpose is to frighten, not me, but those who would come after me.” He added: “Without any judicial order, the administration now seeks to stop me exercising a basic right. A right that belongs to everybody. The right to seek asylum.”

On Sunday night, the former U.S. National Security Agency contractor applied for political asylum at the consulate office of Sheremetyevo airport, according to a foreign ministry official. WikiLeaks employee Sarah Harrison had submitted the request on his behalf, said the official.

Russian President Vladimir Putin said on Monday that Snowden was welcome to stay as long as he stopped leaking U.S. intelligence reports. “If he wants to remain here there is one condition—he should stop his work aimed at inflicting damage on our American partners no matter how strange this may sound coming from me,” Putin told reporters. But he appeared to acknowledge that Snowden was unlikely to fall silent. “Because he feels like a rights activist and defender of human rights all indications are that he is not going to stop this work. So he has to choose a country of residence for himself and move there.”

Snowden’s statement came hours before U.S. Secretary of State John Kerry was due to meet Tuesday with his Russian counterpart Sergei Lavrov in Brunei. Obama on Monday confirmed that there were high-level consultations between Moscow and Washington over Snowden’s fate. “We have gone through regular, law-enforcement channels in enforcing the extradition request that we have made with respect to Mr. Snowden,” he said while on an African visit.

There is no extradition treaty between the U.S. and Russia.

It also emerged that Snowden had written to Ecuador’s President Rafael Correa thanking him for his support in his bid to avoid extradition. He wrote that thanks to Ecuador’s help, he remained “free and able to publish information that serves the public interest.”

In an interview on Monday, Correa appeared to think Snowden’s asylum request might resolve the problem. “I think that if he is on Russian territory and makes an asylum request in Russia, the situation can be processed and resolved there,” he said from the Carondelet presidential palace in Quito. “Legally, Russia has the case,” he said.

Correa has previously voiced support for Snowden, saying he would consider his asylum bid if he can get to Ecuadoran soil or set foot inside one of its diplomatic missions. It was a refugee travel document issued by Ecuador’s London consul that enabled Snowden to flee Hong Kong to Moscow on June 23—and in his letter to Correa, Snowden praised the Ecuadoran consul in London, who had provided it. Correa however has since said that the diplomat overstepped his authority in issuing the documents.

Correa revealed over the weekend that Biden had telephoned him to ask him to reject Snowden’s bid. But the conversation had been “very friendly, very courteous,” he said, adding that no pressure had been applied.

WikiLeaks founder Julian Assange denounced Biden’s intervention on Sunday as “pressure” on Quito. But in a sign of irritation at Assange, Correa said he had urged the activists to stop speaking in Ecuador’s name. Assange has been holed up in Ecuador’s London embassy for a year to avoid British efforts to deport him to Sweden to face accusations of sexual assault.

WikiLeaks has been helping Snowden in his bid to escape extradition to the United States. Snowden arrived in Moscow from Hong Kong on June 23 and is still searching for a safe haven.