Home Opinion So Far, Not So Bad

So Far, Not So Bad 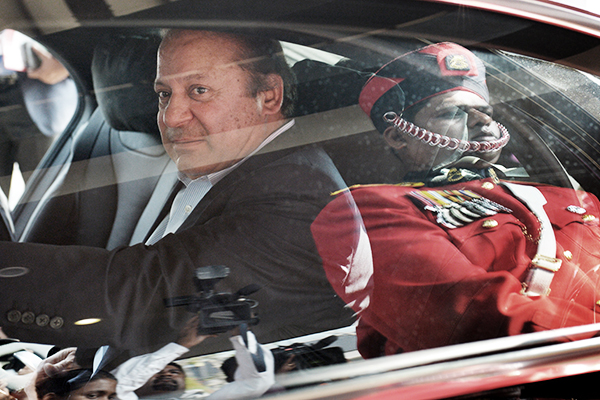 Foreign Minister Nawaz Sharif is on the right track, but…

Nawaz Sharif is arguably the most powerful foreign minister Pakistan has ever had. Some six months since his election as prime minister, the man of many portfolios is being accused by the country’s commentariat of not having made any material strides toward his self-declared foreign-policy goals. This is an inaccurate assessment.

Prime Minister Sharif has everything going for him: a solid majority in Parliament, an incoherent opposition, a sympathetic rightwing media, a team of loyalists, a handpicked Army chief. He can afford to stick to his guns on any matter, and is indeed doing so over normalization of relations with India. Speaking with the Turkish press recently, Sharif put normalization with India on top of his foreign-policy agenda, citing with pride the process he began in 1999 just months before his last government was ousted.

This past year, relations were roiled by skirmishes along the Line of Control in Kashmir and tit-for-tat prison attacks. And let’s not forget the row over Sharif allegedly calling his Indian counterpart, Manmohan Singh, a “village hag.” To overcome historical and self-created irritants, Sharif leaned on backchannel alchemy. His brother has just come back from across the border, where, in a fit of Reaganism, he asked India to “tear down walls”—presumably not literally calling for India’s permanent high-security fence along its border with Pakistan to be razed.

To be clear, Sharif is not allowing Pakistan’s permanent bureaucracy to do its usual number here. He’s put in key positions mandarins who share his belief in normalization through talks and trade. On Dec. 24, the directors-general of military operations for Pakistan and India are to meet to discuss better management of the Line of Control. This is something Sharif had been pushing for since September—and he’s managed to pull it off. Previously, Line of Control skirmishes would have resulted in nothing more concrete than screeching and sulking.

It also helps that opposition figures, from Imran Khan to Asif Ali Zardari to Altaf Hussain, all support normalization. In fact, over the last few years even top Army officers have come to believe that Pakistan must emulate China’s example in dealing with India: promote economic codependencies, put off intractable geographical disputes for later. Sharif wants to give India the “most-favored nation” trading status, but hasn’t—at least not yet—been able to overcome the still-persistent irrational fears that this move will cannibalize Pakistan’s industries.

Building on the successes of Zardari’s government and poised to capitalize on the imminent end of the NATO era, Sharif’s Afghanistan policy, while not novel, is also surefooted. Like his recent predecessors, Sharif is also clear that Pakistan will not impose its own choices on Kabul and wants an “Afghan-led” and “Afghan-owned” peace process following the withdrawal of NATO troops next year. He’s urged President Hamid Karzai to engage the Afghan Taliban for truce talks, and has overseen the release of Afghan Taliban prisoners from Pakistani captivity. Accepting the maxim that good fences make good neighbors, Sharif also wants strong border control. This is where Pakistan must continue to work with the U.S.

Pushed into a corner by the stark populism of rival Imran Khan, Sharif has had to walk a fine line on the alliance with the U.S. And he’s managed to do so without the blinding passions that plague Khan. For example, by emulating the Sino-India normalization model, Sharif’s government has raised the issue of U.S. drone strikes as being counterproductive, but—Chaudhry Nisar Ali Khan notwithstanding—without sacrificing the big-picture security and economic relationship.

NATO suspended its traffic through Khyber-Pakhtunkhwa province (even though shipments continue via Balochistan) after Khan’s street fighters established their nuisance value. The U.S. retaliated by warning of cutting aid and withholding war-on-terror reimbursements if supply routes through the province are not cleared. Sharif has kept his cool through this crisis. One of his government’s key voices on foreign policy, Sartaj Aziz, in fact clearly told Parliament that the Pakistan Tehreek-e-Insaf’s vigilantism will not be allowed to dictate the course of Pakistan’s relations with the United States.

But the Sharif government fails on one important score. Under pressure from the U.S. and Saudi Arabia, it is balking at implementing the regionally-important Iran-Pakistan gas pipeline. His government’s flip-flops over the project make that clear. Instead of engaging both Iran and Saudi Arabia to bring an end to their proxy wars being waged through their chosen sectarian organizations here in Pakistan, Islamabad is choosing to alienate Tehran, which, by the way, has spent considerable sums on its side of the pipeline already.

His focus is vividly regional; given the neighborhood we live in, that’s an ambitious undertaking in itself. The fiascos over the appointment of envoys and the real and rumored rivalries among his team members have not yet obscured his foreign-policy vision. Sharif knows Pakistan cannot survive without allies. Its security and survival lie in opening up Pakistan, ideologically and commercially. This is a long and slow process, fraught with setbacks. Those who expect miracles from Sharif should acknowledge as much.

the author has no idea whats goin on in pakistan. BADLY WRITTEN AND LITTLE IF ANY SENSE CAN BE MADE.

Nasim Zehra’s timely analysis so far reveals that the Centre Right Government in Pakistan is going into a right direction with some unusual steps taken by the Prime Minister. I believe myself like so many progressive minded Pakistanis that relations with India must be a priority for our Foreign Policy because Pakistan must come out from the Army’s ideological thinking that India is a prime enemy of Pakistani State. Pakistan Army and its respective Army Leaders always thought that India is an enemy but they never understood that standing with the USA also did not help the nation and Pakistan society. Today Pakistan is suffering from religious fundamentalism through the policy of Pak army and the agenda of the American foreign policy which we followed since the days of Ayub Khan.

Iran is another factor in our region to be considered as a neighbour but Saudi Arabia and the Gulf States do not like contemporary Iran due to powerful Iranian influence in the Middle East by the rising tide of Shiaism. Prime Minister Nawaz Sharif must look into the Iranian foreign policy and form a new foreign policy for Pakistan to accommodate Iran.

Yes he is doing good on the India & US front but not so good on Afghanistan and Iran. Pakistan has freed some Taliban leaders but have not pressurized them to come to talks. They should have been handed over to the Afghan government. Also we need to stop supporting Haqqani network which is creating instability in Afghanistan. And more importantly we need to stop supporting militants in Kashmir. We have to convince India diplomatically. And most importantly we need to engage Iran as it is our neighbor and ideological friend. We need to realize the importance of Iran especially the Nawaz government needs to ponder on this. Saudia and USA are no doubt very important to Pakistan but we have to convince them to leave us alone on our relations with Iran and need not poke their noses in our affairs.
And please Imran Khan focus on the economic development of the province and stop being an information minister to TTP. Also to Sharif, shrug off the cowardice and declare full scale war on TTP and theri allies. TTP have made their intention very clear by selecting Fazlulah as their leader, now it is high time we as nation understand that!!!