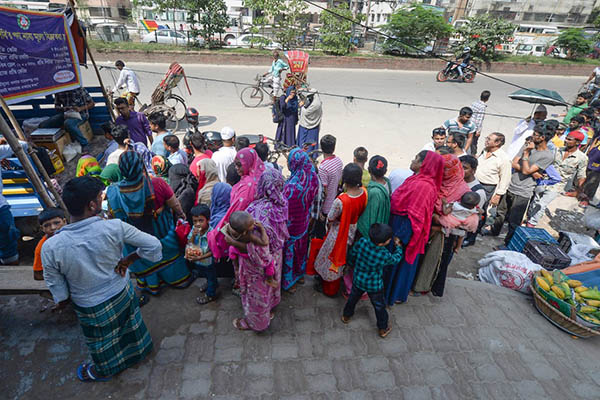 A ban on onion exports by India has caused shortages, soaring prices and widespread anger in neighboring Bangladesh, where the bulb is used in almost all aspects of the national cuisine.

The price of onions is a sensitive subject in South Asia, where shortages can trigger widespread discontent with political ramifications. About two-thirds of the demand for onions—an essential ingredient in Bangladeshi cuisine—is grown locally by farmers, with the rest mostly imported from neighboring India, where heavy monsoon rains have reduced the crop.

One kilogram of the staple vegetable usually costs 30 taka, but has soared to up to 130 taka after India imposed the export ban over the weekend.

Amid a public outcry, Dhaka quickly took steps to import the vegetable from Myanmar, Turkey, China and Egypt. The state-run Trading Corporation of Bangladesh (TCB) is also selling onions at a discounted 45 taka per kilogram in the capital Dhaka. But in the city of 18 million, only about 9,000 people—limited to two kilograms per person—are allowed to buy the vegetable at the subsidized rate each day.

“Our aim is to help the low-income people, although even middle income people are also buying onion from our trucks,” said TCB spokesman Humayun Kabir.

One of the operators of the 35 trucks selling the cheaper onions, Mohammad Rafique, told AFP he distributed 400 kilograms of onions on Wednesday to around 250 people. “But we had to send back at least 50 to 60 people empty-handed as we ran out of supply,” he said.

One frustrated buyer left with a bitter taste was Bangladeshi banker Raihan Aziz. “I spent my entire lunch break standing here. But all my efforts have come to nothing,” Aziz told AFP. “It seems we have to change our eating patterns, omitting onion from curries and our daily menu.”

The eye-watering prices have also forced some restaurants to chop the bulb from their menus. “We used to give free onion with green salad to our customers. But we no longer do it,” a Dhaka restaurant waiter told AFP.

Meanwhile consumers have accused wholesalers of hoarding the vegetable to jack up prices, a charge they deny.

Heavy monsoon rains in key onion-growing regions have been blamed for the current shortage in India. In an effort to arrest further price rises, New Delhi imposed the export ban and suppliers and distributors are blocked from stocking up. Some reserve onion stocks held by the national government are also being sold in several states at subsidized prices.