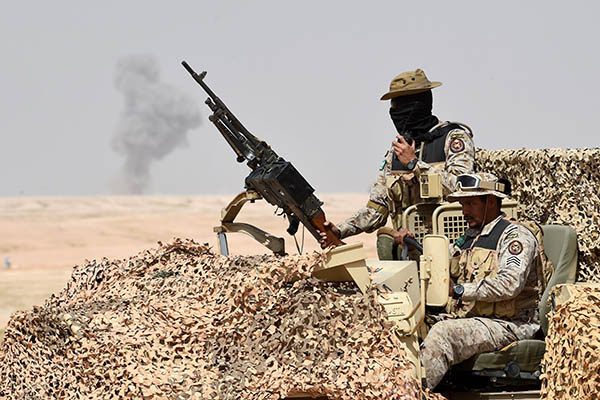 Pakistan is not just about to get into the Middle East, it has always been there

The brevity of the statement raised many questions. The debate on social media seemed to revisit Riyadh’s pressure on Pakistan in 2015 to join the Saudi-led alliance. At the time, and to wit, the Saudi-led Islamic Military Counterterrorism Coalition, headed by Pakistan’s former Army chief, Raheel Sharif, was and is seen by most as an effort by Riyadh to get troops for its war against Yemen.

A war against the Houthi rebels in that country has, since it started, led to immense suffering in Yemen while being unable to fulfill its primary objective of defeating the Houthis. The campaign, now in its third year, has failed to find any anchor. Former president Ali Abdullah Saleh, who had broken away from the Houthis, was killed last December within days of his overture to Saudi Arabia. Meanwhile, in the latest development, groups supporting the Saudi-U.A.E. coalition have turned on each other, driving the war strategy further deep into the hole in which it finds itself.

Back in 2015, Pakistan refused to kowtow to Riyadh and the Parliament, after debating the issue, resolved that Islamabad will not send troops to Saudi Arabia both because the Saudi campaign was ill-conceived and ill-planned but also because Pakistan can’t afford to deepen the already-existing sectarian divide within. The reaction from Riyadh and the U.A.E. was severe and included undiplomatic bursts of public anger by the Emirati foreign minister Anwar Gargash.

The country saw a similar debate when former Army chief Gen. Raheel Sharif was tipped as the head of the Saudi-led CT alliance. The less passionate analyses, however, understood that Sharif’s service to Riyadh was the best possible way to ease Saudi pressure. Tehran was also kept posted on these developments to allay any fear that Pakistan was throwing in its lot with the Saudis against Iran.

One needs to understand the background to see why the Feb. 15 statement by ISPR led to a fresh round of speculation regarding the sending of troops to Saudi Arabia. The bit about ‘training and advice’ was rejected as a smokescreen for operational deployment. The sentiment in the Pakistani media, both mainstream and social, was also picked up by some foreign news outlets that thought it was a bad move and threw Pakistan into Saudi Arabia’s orbit.

The issue was also raised in the Senate by Senator Farhatullah Babar of the Pakistan Peoples Party. Babar wondered why Parliament was not apprised of this development and why the troops were being sent when Parliament had already resolved against any such deployment.

The confusion was a direct result of the ISPR statement, which, although it did not use the term ‘deployment’, opting instead for ‘employed’, made no effort to clearly state that the decision was made under a 1982 bilateral protocol and the troops going to Saudi Arabia had nothing to do with the Saudi-led coalition headed by General Sharif.

In the absence of such clarity, it was natural for people to comment on the statement negatively and conflate the ‘training and advice’ mission with the multi-state military CT coalition.

There was also the question of why the ISPR put out the statement, which should either have come from the Ministry of Foreign Affairs or the Ministry of Defense. Further, while it was later clarified by the Army, as also by Minister of Defense Khurram Dastgir-Khan, that the deployment (the term not used by the ISPR) was under a bilateral protocol, questions arose about the extent and nature of the protocol.

During one of my TV programs, former Chief of General Staff Lt. Gen. Waheed Arshad mentioned that the protocol is with the Ministry of Defense and it casts the net wide. But neither Parliament nor any analyst, to anyone’s knowledge, has seen the protocol or read what it provides or aims to. Nuts-and-bolts information, however, suggests that the fundamental thrust of such cooperation is to ensure the safety of the House of Saud, a task Pakistani troops have performed previously and will do even now, though there’s also the component of training Saudi Land Forces, estimated at 75,000.

In any case, the Ministry of Defense should make public whatever provisions of the protocol it can. Since no one knows the nature and extent of its provisions, it is difficult to say if there’s anything therein that the government might be reluctant to make public on the basis of such information prejudicing bilateral relations or national security.

There’s also the issue of IOUs and other reciprocities, issues the comments in social media either ignore or are not aware of.

For instance, Riyadh’s support to Pakistan, in addition to Turkey and China, at the FATF meeting in Paris is a very important development especially because the Saudi king, Salman bin Abdelaziz and Mohammad bin Salman, his son, who is his éminence grise and successor, are very close to U.S. President Donald Trump and his family.

This is in addition to other areas of cooperation, as also the human resource in the Gulf. Pakistanis send fat remittance checks back home, worth billions of dollars every year. However, as should be obvious, diplomacy does not mean—or shouldn’t—putting all the eggs in one basket. We have had similar arrangements with Iran and Turkey. It is no coincidence that the current Army chief, General Qamar Bajwa, met with both the Turkish and Iranian ambassadors before his meeting with the Saudi envoy and the release of the statement. In fact, Bajwa has met with the Iranian ambassador several times and has also visited Iran.

Sources in the military and Ministry of Foreign Affairs are very clear that Islamabad has no intention of doing business with Riyadh at the cost of its relations with Tehran and/or Ankara. Equally, as should be obvious, whether we like the House of Saud or not, other states have to deal with whatever the power configuration in Riyadh is. And that includes not just Pakistan but other more powerful states in Western Europe and North America. Deft diplomacy is about an inclusive, not exclusive approach. Nor is it a function of some starry-eyed idealism. In the real world the waters are always choppy and the Middle East waters are choppier.

Finally, as I wrote in this magazine on April 10, 2017: “Pakistan is not just about to get into the Middle East, it has always been there. In fact, over the years, its contribution to training cadets and officers from Middle Eastern militaries has increased. And that does not just include Saudi Arabia, but also Iraq, which is now led by a Shia-dominated government. During the 1980s, as Iran and Iraq slugged it out in a long, often stalemated war, Pakistan and its Army remained involved in multiple peace initiatives.”