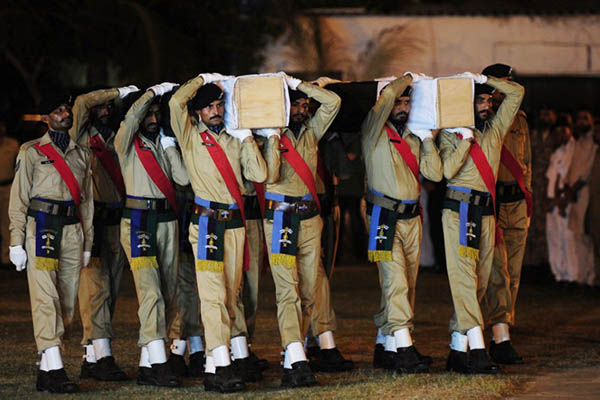 Two soldiers were shot dead on Tuesday when gunmen on motorcycles opened fire on their pick-up truck in Karachi, officials said.

Dr. Kaleem Shaikh, at Jinnah Post Graduate Medical College, told AFP that the dead men had been identified as Khadim Hussain and Abdul Razzaq. Both were shot in the head and face, he said. “Razzaq died after reaching hospital while Hussain also died of his wounds after some time,” Shaikh added.

A faction of the Tehreek-e-Taliban Pakistan claimed responsibility for the attack. Jamaat-ul-Ahrar spokesman Ehsanullah Ehsan told media the soldiers had been on the terror group’s “hit list.”

Pakistan launched a major crackdown on Islamists and criminals in the city, which is the country’s economic hub, in 2013 and levels of violence have dropped drastically since then. The killing of Army personnel outside the northwestern tribal areas on the Afghanistan border and Balochistan remains rare.