Some Basics about Pakistan’s Upcoming Elections 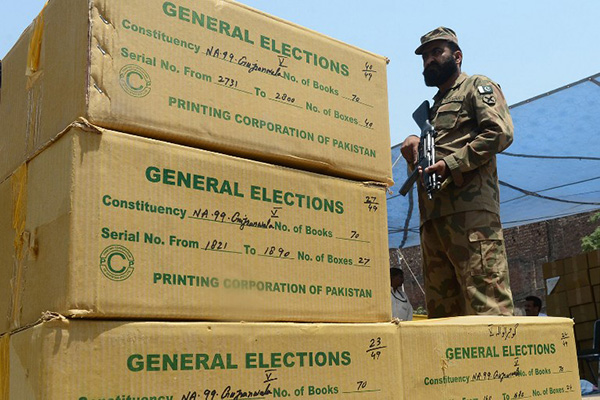 Pakistan goes to the polls on Saturday to elect lawmakers to the national and four provincial assemblies.

Some key facts about the 2013 elections:

Candidates
There are 4,670 candidates standing for 272 seats in a first-past-the-post system in the 342-member National Assembly. Sixty seats reserved for women and 10 for non-Muslim minorities are distributed by proportional representation based on each party’s share of the directly-elected seats. A total of 10,955 candidates are running in elections for Pakistan’s four provincial assemblies in the Punjab, Sindh, Khyber-Pakhtunkhwa, and Balochistan. Only 161 women are standing in the general elections for the National Assembly, 3.5 percent of the candidates.

Polling Stations
The Election Commission of Pakistan has set up around 70,000 polling stations, 40 percent of them for women, to be staffed by more than 600,000 people. Voters must present their ID cards, and their fingers will be inked after voting to prevent vote tampering.

Hours of Voting
Polls will open at 8 a.m. on May 11 and are scheduled to close at 5 p.m. Elections have been postponed in three constituencies—two for provincial assembly seats and one for a National Assembly seat—after candidates were assassinated during the campaign.

Security
More than 600,000 security personnel, including 50,000 soldiers, will be deployed during the election to guard against Taliban attacks that have killed over 100 people during the campaign thus far. Cellphones are not allowed inside the polling booths. Those who refuse to surrender their cellphones will not be allowed to vote.

Tribal Areas
Pakistan’s seven semiautonomous federally-administered tribal areas elect 12 members to the National Assembly. This year is the first time that political parties have been able to contest elections in the area, a Taliban and Al Qaeda hotbed on the Afghan border.

Post-Vote Steps
Ballots will be counted by hand at individual polling stations. They will be forwarded to provincial election commission offices and then tallied in Islamabad. First results are expected from 10 p.m. onwards, the complete results will be announced by May 12, and the Election Commission will certify the final results within a week. A majority of 137 out of 272 directly-elected seats is required to form a government.

Observers
Tens of thousands of local and international observers, along with representatives of the candidates and media, are to monitor polling. The main Pakistan observer organization is the Free and Fair Election Network, which aims to field 43,500 observers across the country.