Home News Galleries Something to Talk About

Something to Talk About 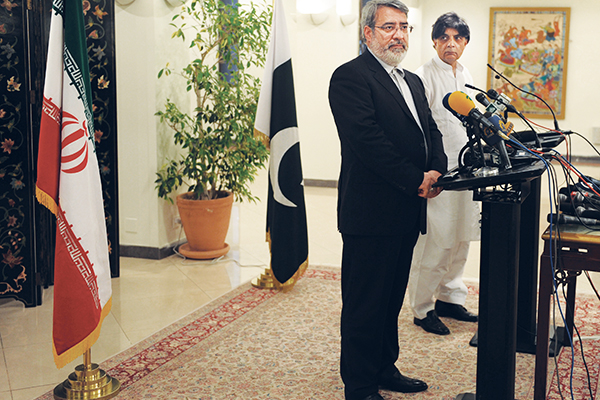 Relations between Pakistan and Iran have been fraught especially since the Feb. 6 abduction of five Iranian border guards by Jaish-ul-Adl militants. Following the kidnapping, Iran threatened to send troops inside Pakistan to free the hostages. (Four men were freed; one is believed to have been killed.) On May 6 in Islamabad, Pakistan’s interior minister, Chaudhry Nisar Ali Khan, and his Iranian counterpart, Abdolreza Rahmani Fazli, jointly announced working on new protocols to prevent such instances from happening again. But there is tension from other issues too. Iran finds Pakistan’s revised, Saudi-echoing position on Syria problematic. It is also none too pleased about Pakistan’s apparent abandonment of the Iran-Pakistan gas pipeline and is asking Islamabad to abide by its contractual obligations—including paying penalties for delays. Prime Minister Nawaz Sharif goes on a two-day, fence-mending visit to Tehran—where he is scheduled to meet with the country’s president and its spiritual leader—on May 11. He’ll have plenty to discuss.