Home Scope ‘Soon We Will Punish this Satan’

‘Soon We Will Punish this Satan’ 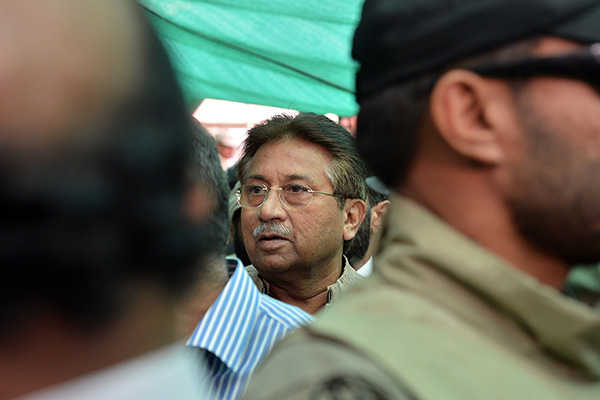 Soldiers escort Musharraf as he arrives for a court hearing. Aamir Qureshi—AFP

The Pakistani Taliban on Sunday issued a fresh threat to assassinate former president Pervez Musharraf, who is currently facing a barrage of legal cases in police custody.

The retired general has been detained in his farmhouse in Islamabad since April 19 on charges of conspiracy to murder former premier Benazir Bhutto, sacking of judges when he imposed emergency rule in 2007, and the 2006 death of a Baloch rebel leader.

Before his arrival in March, the Tehreek-e-Taliban Pakistan threatened to kill him for his decision to ally with the U.S.-led war on terror and attempts to clamp down on militants, when he was in power. Taliban spokesman Ihsanullah Ihsan on Sunday issued a fresh warning in a video message posted on Taliban website Umar Media, saying: “Soon we will punish this Satan to death for his wicked deed.”

Musharraf became the Taliban’s most-wanted target after ordering the Army in 2007 to storm the Lal Masjid in Islamabad, where radicals were holed up. The operation left some 100 people dead. “From Balochistan to Waziristan, Musharraf threw this country in blood and fire, he is the killer of hundreds of innocent students of Lal Masjid,” Ihsan claimed.

An antiterrorism court on Wednesday refused bail to Musharraf over the detention of judges. The ruling came two days after another court granted him bail over the murder of former prime minister Benazir Bhutto, who was killed in a gun-and-bomb attack in 2007.

Taking the former Army chief into custody was an unprecedented move in a country ruled for more than half of its life by the military and was seen by many as a challenge to the armed forces’ power. Since Nawaz Sharif, ousted by Musharraf’s coup in 1999, won the elections there has been speculation a deal would be reached to allow Musharraf to leave Pakistan without facing the courts.

Musharraf escaped at least three assassination attempts when in office from 1999 to 2008, a target of Islamist extremists because of his alliance in the U.S.-led “war on terror” and attempts to clamp down on militants. After his house arrest, a car laden with explosives was discovered outside his farmhouse in April.

Lal Masjid students were fully armed and were terrorist killers led by fanatical Ghazi Bros. If anyone is to blame it is the Gahzi Bros! Why is Maulana Abdul Ghazi the cowardly burqa wearing Jihadi allowed to go scott free? Taliban are animals and should be wiped out by Army, but Pak Govt and Kiyani are too scared to act against Taliban? Why and who are they protecting and endangering the survival of the nation?

Talibans are not human they are are vultures feeding on human blood annihilate them from the face of the world for your survival,we hate them more than we hate america who has brought us to this state,for binladinhe played havoc with afghanistan and pakistan and for saddam it destroyed iraq completely.america is also a devastating player in this whole gory drama.

Pathetic reason put forward by so called ‘Truthteller’. You don’t order such an operation to score’ brownie points’ while the biased media twists it and maligns its own President. Whatever he did was purely in national interest and he did it rightly so. I would like to ask his/her opinion if, God forbid, one of the family members gets killed in an attack from the Lal Masjid fanatics.