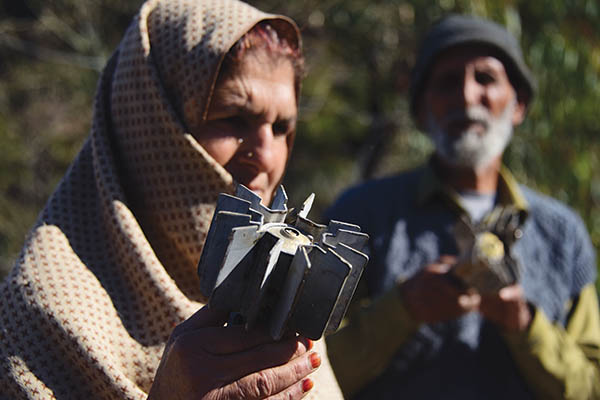 File photo of a resident of Pakistan-administered Kashmir holding mortar shells following cross-border firing from India across the Line of Control. Sajjad Qayyum—AFP

The advisory came after Pakistani officials evacuated more than 50 Chinese nationals working on a dam being constructed in Pakistan-administered Kashmir along the confluence of the Neelum and Jhelum rivers.

Pakistan on Sunday accused India of using cluster bombs against civilians in the same area, in Noseri sector. Both countries control parts of the disputed Himalayan region.

Authorities later asked the villagers through social media and WhatsApp messages to remain alert and not to approach any suspicious object as the “enemy was using toy bombs, mortar shells and artillery.”

Local authorities later took a group of reporters to the Noseri area, on the Line of Control (LoC) where Badr Munir, a senior government official, briefed them on the escalation at the de facto border. “Four people have been martyred and 11 other wounded by cluster bombs in two different incidents,” Munir said.

An AFP reporter at the scene saw that the Noseri Bazaar appeared deserted, with shops closed and less traffic than usual on the roads. Authorities also showed two unexploded cluster bombs to reporters. The site was cordoned off by police to prevent people from getting closer to avoid any further damage.

Munir said a group of experts along with police was searching for more unexploded bombs in the area.

Muhammad Siddique, father of a cluster bomb victim in the area, told reporters his children were playing outside when they found the unexploded weapon and brought that home. “It exploded as they were playing with it. My son Ayan Ahmad was martyred and 11 people were wounded in the incident,” Siddique said.

Cluster munitions can contain dozens of smaller bomblets that disperse over large areas, often continuing to kill and maim civilians long after they are dropped. Their use is banned under an international treaty, which neither India nor Pakistan has signed on to.

Pakistan’s Prime Minister Imran Khan on Sunday accused India of taking “new aggressive actions,” saying it could “blow up into a regional crisis.” Khan later chaired a meeting of the country’s national security committee to review the situation in Kashmir.

Tensions remain high with rival India after the neighbors launched tit-for-tat airstrikes in February following a suicide bombing perpetrated by a local separatist but claimed by Pakistan-based militants in India-Occupied Kashmir. Since then they have stepped back from the brink, but firing between the two sides across the de-facto border dividing Kashmir has continued.

Kashmir is ruled in part but claimed in full by both countries, who have fought two of their three wars since independence in 1947 over it.