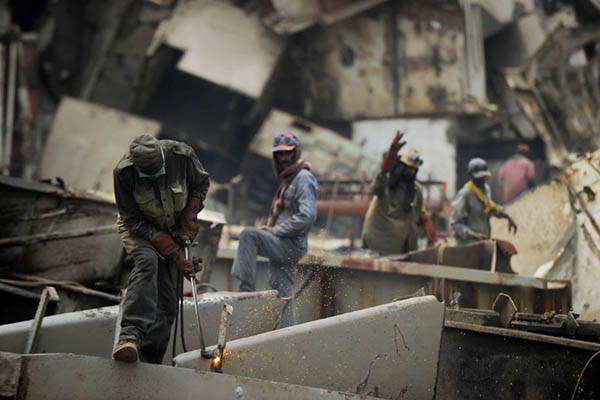 Pakistan, India, Bangladesh account for two thirds of the business.

The world market for ship demolition remains strong, with Pakistan, India, and Bangladesh together accounting for more than two thirds of the business.

According to the French environmental watchdog Robin des Bois (or Robin Hood) on Thursday, 1,119 ships went to the world’s breaker yards in 2013—a decline of 16 percent from the previous year. The figures “confirm that the ship demolition sector is in good health,” it said. The 2013 figure is the second highest tally since 2006, when the group began compiling annual reports in an effort to boost transparency in a sector with a contested environmental record.

Of the 1,119 ships, 667 were scrapped after being held at ports, along with their crew, for failing to meet international safety standards, the report said. “Port inspections are playing a solid role in cleaning up the world’s merchant fleet,” it said. Roughly a third of ships that were broken up were bulk carriers, while container ships accounted for one in six—a sharp rise over the last half dozen years.

South Asia has long been a graveyard for merchant ships, but it also carries a reputation for poor safety and environmental hazards. The European Union has approved regulations requiring large EU-flagged vessels to be recycled at approved facilities.

Robin des Bois described the intention as “pious,” given that only eight percent of such vessels were scrapped at European yards in 2013, and many European ships were given a flag of convenience by their owners for their last voyage.