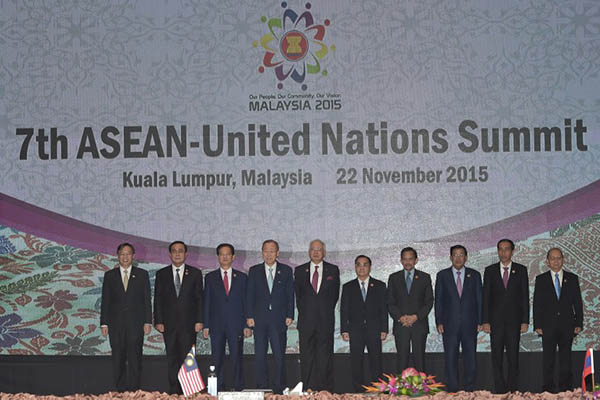 ASEAN countries want to set up an E.U-style economic bloc, but observers say it might take years to implement it.

Southeast Asian leaders on Sunday symbolically declared the establishment by year-end of an E.U.-style regional economic bloc, but diplomats admitted it will be years before the vision of a single market can be realized.

At the group’s annual summit, held this year in Kuala Lumpur, the heads of the Association of Southeast Asian Nations (ASEAN) signed a declaration that the bloc hailed as “a milestone in the integration process.” The 10 leaders then put an aural exclamation mark on the agreement by banging once in unison on a traditional drum from each of their nations.

However, diplomats have admitted Sunday’s declaration has no practical effect, and was largely meant to avoid having ASEAN—regularly criticized for its lack of concrete achievements—miss its own deadline of 2015.

Several years ago ASEAN set a 2015 target for launching the ASEAN Economic Community (AEC), a single market with a free flow of goods, capital and skilled labor across borders. The summit’s host, Malaysian Prime Minister Najib Razak, urged his counterparts to step up efforts to realize a vision that many experts view as difficult, if not impossible, to achieve.

“We now have to ensure that we truly create a single market and production base with freer movement of goods and services with common standards, far greater connectivity and removal of barriers,” Najib said. Achievement of that vision will cause foreign investment in the region to “expand exponentially.”

The AEC is aimed at marshaling the combined economic force of a resource-rich and growing market of more than 600 million people to enhance its trading clout and help it compete with the likes of China for foreign investment.

Great progress has been made on lower-hanging fruit like slashing tariffs and removing other hurdles such as clashing customs systems. But significant non-tariff and other barriers remain in a region marked by extremes in development levels, democratization, and institutional capability.

A Southeast Asian diplomat conceded the single market vision is many years away but argued the declaration will help change ASEAN’s “mental map” and provide momentum. “We hope this will help the people and governments to think more and more on the basis of regional interests rather than purely national interests,” the diplomat said.

ASEAN includes wealthy Singapore, one of the world’s most developed countries, oil-rich Brunei, developing states like Malaysia, Indonesia, Thailand, the Philippines and Vietnam, and poorer nations like Cambodia, Laos and Myanmar. Its members range from freewheeling to controlled democracies, communist-ruled states and an absolute Islamic monarchy.

Najib on Saturday acknowledged much work remained, saying “non-tariff barriers, which affect daily life and employment across our nations, are too extensive.”

Although ASEAN’s plans were inspired by Europe, officials insist they want to pursue integration in a way suitable to the region’s circumstances, and have ruled out a common currency.

U.S. President Barack Obama, who is in Kuala Lumpur for a Sunday summit of ASEAN and regional partners such as China, Japan and India, praised the AEC and pledged American support. Speaking Saturday, he called the declaration a “major step toward integrating economies and greater regional stability.”