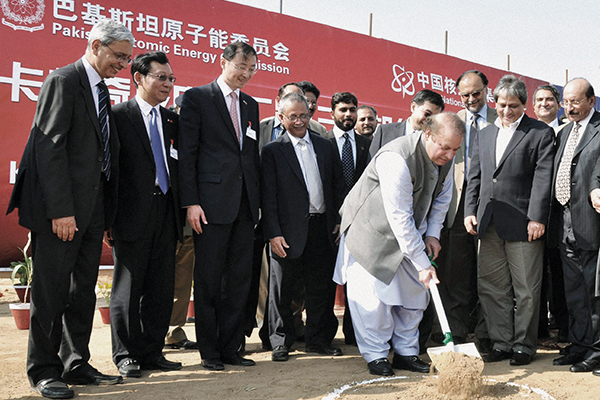 Nawaz Sharif won power in the May elections because of Pakistan’s lack of it. His government is now dusting off power generation projects initiated by the Zardari-led and Musharraf-led governments to reduce long-running electricity deficits that cost the country billions in lost economic activity and those governments their popularity. On Tuesday, Prime Minister Sharif, spade in hand, broke ground near Karachi for what is to be Pakistan’s largest nuclear-power plant. The 2,200-megawatt, Chinese-made facility will cost almost $10 billion and may be completed by 2019, if funding proves no trouble for Sharif’s cash-strapped government. Sharif announced he wants to set up six more plants to take Pakistan’s nuclear capacity to 40,000 megawatts by 2050. (China has said it doesn’t plan on building more than the two plants it has already committed to Pakistan.) Sharif is now also pursuing another pre-Sharif initiative he had all but formally scrapped. Two days after the Nov. 24 interim agreement between six world powers and Iran, Sharif’s adviser Sartaj Aziz offered platitudes of Muslim brotherhood to officials in Tehran and recommitted Islamabad to the Iran-Pakistan gas pipeline project. Many of these projects are likely to materialize after Sharif’s term expires in 2018. He can be sure whoever comes to power next will take full credit for them.