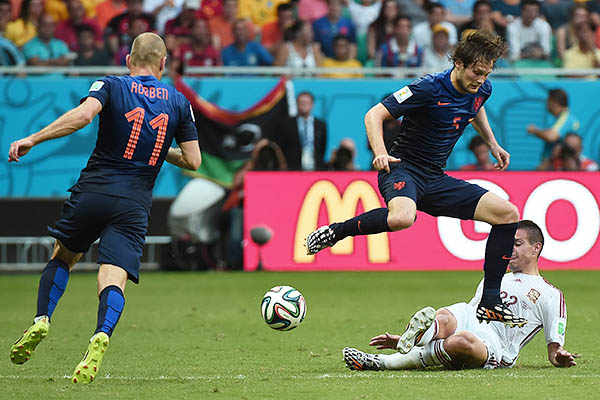 Four games to be played on super Saturday at the 2014 FIFA tournament.

England and Italy begin their World Cup campaigns in the suffocating humidity of the Amazon jungle on Saturday while FIFA reel from ongoing blundering referees and Spain lick their wounds.

As well as the oppressive climate in Manaus, once the bustling center of Brazil’s 19th century rubber industry, both England and Italy will have to contend with a playing surface condemned as not fit for purpose by a players union. However, England boss Roy Hodgson said he was happy with the surface having seen it first hand on Friday. “We’ll be happy to play on that pitch. It’ll play well and will suit both teams. The grass is short, the pitch is flat, and we should be able to play good football on it,” said Hodgson.

England and Italy last met in the quarter finals of the 2012 European Championship in Kiev, when Italy prevailed on penalties after a 0-0 draw that they largely dominated. England has confirmed that striker Danny Welbeck will be fit to play after recovering from a thigh injury.

While Hodgson’s team is packed with young talent, the Italian outfit of coach Cesare Prandelli has a raft of experience with 35-year-old Andrea Pirlo, the mastermind of their 2006 World Cup triumph, pulling the strings from midfield.

On super Saturday at the World Cup, three other games will also take place. In the same Group D shared by England and Italy, Copa America champions Uruguay face Costa Rica in Fortaleza. Uruguay are certain to be without Luis Suarez with the Liverpool striker still struggling to recover from a knee injury.

Coach Oscar Tabarez confirmed that in the absence of Suarez, Diego Forlan would partner Edison Cavani in attack, whilst Cristian Stuani will start ahead of Gaston Ramirez on the right.

Uruguay were the surprise package of the World Cup four years ago when they reached the semi-finals before narrowly losing out to the Netherlands and Tabarez believes that experience and winning the Copa America in 2011 should make them an even more formidable side this time round.

In Group C, Colombia and Greece clash in Belo Horizonte worried over where their goals may come from. The South Americans were rocked when talismanic striker Radamel Falcao lost his battle to be fit for the finals after suffering a serious knee injury, instantly robbing the team of a man who has scored 20 goals in 51 internationals.

Greece can call on first-choice striker Kostas Mitroglou who has plenty to prove after his £12 million move from Olympiakos to Fulham turned into a nightmare. The player called ‘Pistolero’ by his adoring Greek fans made just one start for the London club, who were relegated from the Premier League while he spent most of his time fighting a knee injury.

At Recife, Ivory Coast, who have yet to get out of the group stages at any World Cup finals, tackle Japan. “We have great players, international class players like Didier Drogba, Yaya Toure and Gervinho, but this generation has still not won anything and we need to find out why that is,” said coach Sabri Lamouchi.

Asian champions Japan will look to the creative spark of Manchester United’s Shinji Kagawa and Keisuke Honda of AC Milan.

Spain meanwhile have their work cut out to figure out what went wrong after being mauled 5-1 by the Netherlands in their opening game. “I can’t find the words to explain that, we are normally solid in defense, but today we were very weak,” said coach Vicente Del Bosque, whose side face a make or break clash with Chile, 3-1 winners over Australia, in Rio on June 18.

FIFA, meanwhile, were facing more questions over the standard of refereeing at the tournament. Following the controversy of a penalty award for Brazil in their win over Croatia, Mexico had two goals wrongly ruled out for offside in their 1-0 victory against Cameroon while Spain benefitted from another highly dubious penalty against Holland. “Human error exists. We have to learn to put up with whatever comes our way,” said Mexico coach Miguel Herrera.