Home Latest News ‘Spare No One’ 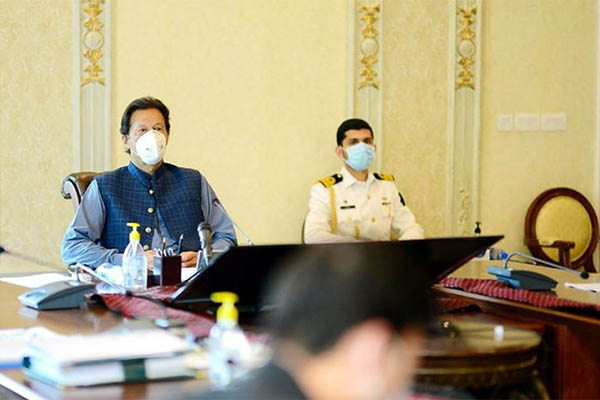 Prime Minister Imran Khan on Tuesday ordered authorities concerned to ensure punishment for anyone found responsible for the “artificial petrol shortage” in the country, and promised that the sugar inquiry commission’s report would be taken to its logical conclusion.

Chairing a meeting of the federal cabinet in Islamabad, the prime minister ordered authorities to ensure regular supply of petroleum products was restored within 48-72 hours.

The cabinet also directed the Petroleum Ministry to form joint raiding teams with the Petroleum Division, the Federal Investigating Agency, the Oil and Gas Regulatory Authority, and district administrations to physically inspect all oil companies’ storage facilities. It said any company found purposely not maintaining mandatory stock minimums under the terms of their license should be subjected to punitive actions, including suspension or cancellation of their licenses and heavy fines.

The cabinet was informed that supplies for June 2020 totaled 850,000 metric tons, as opposed to 650,000 metric tons at the same time last year. It “urged the public not to engage in panic buying” and identify hoarders so they could be punished.

Discussing the sugar inquiry committee’s report about the cartelization of sugar mills in the country, the cabinet learnt that implementation of the recommendations proposed in the report had commenced following approval of the prime minister. The prime minister said his government believed in complete transparency and the protection of people’s rights, vowing that the inquiry would be taken to its logical conclusion. He expressed the resolve to bring down sugar prices at all costs.

According to a statement issued by the Prime Minister’s Office, it was learnt that action against 88 sugar mill owners was expected. Stakeholders informed the prime minister that the Federal Board of Revenue would likely probe charges of fraud in sales tax, while a Competition Commission of Pakistan investigation would probe the cartelization of sugar mills. The State Bank of Pakistan would investigate companies that had shown fake exports and were loan defaulters, while the FIA and the Securities and Exchange Commission of Pakistan would investigate corporate fraud, stock fraud, shareholder fraud and other types of corporate fraud.

Referring to the ongoing COVID-19 pandemic, the prime minister reiterated his stance—unchanged since March—that Pakistan could not enforce lockdowns due to its precarious economic situation. “On the one hand, we are facing threat of contagion, on the other, poverty is a great challenge for us,” he said.

He directed officials concerned to raise awareness among the citizenry for the need to observe Standard Operating Procedures (SOPs) issued by the government to prevent spread of the virus.

During its meeting, the cabinet approved the decisions taken by the Economic Coordination Committee to privatize the Pakistan Steel Mills, adding that the government was pursuing a reforms agenda to improve performance of various institutions. It also approved various recommendations presented by Adviser to the P.M. on Institutional Reforms and Austerity Ishrat Hussain regarding quality workforce in government departments, especially through the hiring of competent individuals to head state organizations.

The cabinet approved reserving Sector F-12 and Sector G-12 for Federal Government Employees Housing Authority and granted permission to acquire land in these sectors for this purpose.