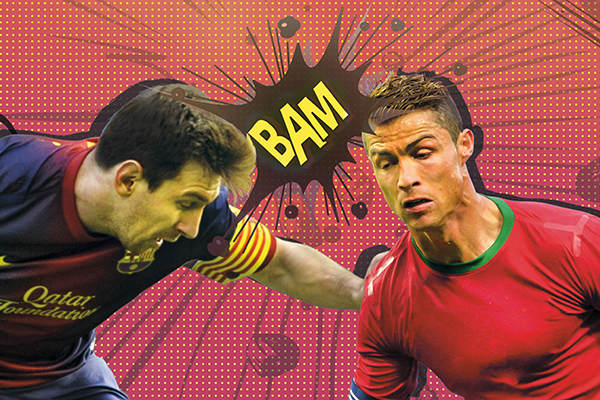 The gripping Messi versus Ronaldo debate.

[dropcap]L[/dropcap]eBron James has appeared on the cover of Sports Illustrated six times in the past two years. No other person has had more than three covers in that span. Basketball’s King James is currently the most popular athlete in American sports and has 14 million followers on Facebook. Cristiano Ronaldo, a forward with football club Real Madrid, has 62 million Facebook followers. But he has never made the cover of the sports magazine.

Peyton Manning has thrown 16 touchdown passes in the first quarter of this NFL season. The Denver Bronco quarterback is on pace to break the league’s single-season record in that category, which would eclipse a record that has stood for six years. Meanwhile, Lionel Messi, a forward with FC Barcelona, scored 91 goals (in only 69 matches) last year, shattering a Guinness World Record in international football that lasted four decades.

While Americans have a tendency to lose themselves in insular non-troversies—such as whether Michael Jordan in his prime could beat James one-on-one—sports’ greatest rivalry is taking place on the Iberian Peninsula, between Ronaldo and Messi.

Messi, who made his debut with Barca at the age of 17, has scored 324 goals in 388 appearances with the Catalan club. Before his 25th birthday he was already the leading scorer in the club’s history. Ronaldo, who was only one year older when he first appeared for Manchester United in 2003, has scored 335 goals in 531 matches. Since joining Real Madrid in 2009, Ronaldo has scored a staggering 212 goals in 208 matches.

Some background: Messi, a diminutive (5’7”) dribbling wizard was born in Argentina. After being given a tryout with FC Barcelona at the age of 11, the team official was so impressed that he offered the prepubescent prodigy a contract then and there. With no paper being readily available, the contract was written and signed on a napkin. Messi has been with Barca ever since, graduating to the top-tier club at the age of 17.

Ronaldo is a chiseled 6’1” and was born and raised on the island of Madeira, a Portuguese territory off the coast of Morocco. At the age of 15 he was diagnosed with “a racing heart,” which every female who saw his topless Vanity Fair cover from 2010 will find ironic. He underwent surgery, which corrected the problem. Ronaldo signed with Manchester United, then the world’s most valuable sports franchise in 2003, when he was 18. He was promptly given the jersey number “7.” Previous wearers of that kit were George Best and David Beckham.

In terms of style, there is a Magic Bird dynamic to the pair. Messi is terrestrial, deftly out-dribbling defenders or flicking passes to teammates. He is the consummate point guard who can also score. Ronaldo is an offensive Sharknado, often appearing to glide down from the heavens to head a ball into the net, though his right leg is equally lethal.

In Europe, where Messi and Ronaldo are bigger than Bono, the debate rages as to which forward is superior. Ronaldo addressed the issue in May 2012, in the manner befitting a man whose salary stipulates that he earn $21 million after taxes: “You cannot compare a Ferrari with a Porsche because they have different engines.” Oh, and about Spanish taxes: Ronaldo falls in the debt-ridden, unemployment-plagued nation’s 52 percent tax rate, meaning that Real Madrid pays Spain more for Ronaldo’s services than it pays Ronaldo. Messi earns $15 million pretax—and should probably hire Ronaldo’s agent.

The most wonderful part of the Messi-Ronaldo relationship for fans is that outside of the United States, the Barca-Real rivalry is as famous as any two professional sides. Though these clubs face each other a minimum of two times annually (in La Liga), every match is referred to as El Clasico. Hype? Not when Messi and Ronaldo are on the pitch.