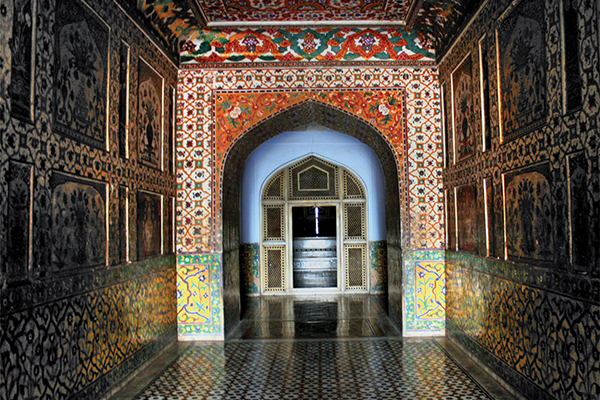 With its storied traditions, pluralism and diversity, there’s no place quite like it.

A city is only as universal as the ideas it inspires, and Lahore is a truly global city. Its storied history and traditions, pluralism and diversity, and the warmth and generosity of its people make Lahore one of the most unique cities in the world. It is the culture capital of Pakistan because it has led and fervently celebrates the creative process. It has shaped political, social and economic thought, establishing its intellectual primacy as the source of resonant discourse.

The Lahore Literary Festival is an articulation of this sense of the city. Its debut edition two years ago featured some 60 local and foreign speakers in scintillating and thought-provoking discussions on literature and the arts. It drew 30,000 people over two days. Last year, LLF welcomed about 100 speakers from eight countries, and some 50,000 people attended the free, open-to-public event. This year’s three-day festival begins Feb. 20, and will feature panelists from home and abroad who will discuss literature, art, music, poetry, drama, film, journalism, education, history and politics with audiences from Lahore and across Pakistan.

LLF highlights all that is good about Pakistan. “Literary festival brings feel-good factor to Lahore: Initiatives like this festival are efforts to reclaim a different narrative, and future, for this country,” said the BBC. “At the Lahore Literary Festival, it was the other side of the city that was on display: the Lahore of rich history, culture and debate that has been gradually eroded by contemporary Pakistan’s challenges,” wrote The Wall Street Journal. “With a sizable liberal elite, a strong tradition in publishing and the arts, and an old city filled with extraordinary Mughal architecture, Lahore arguably has more in common with the leading cities of India and Europe than with the dark image of Pakistan shown almost daily in the news,” the New York Review of Books has noted.

Lahore is a city of plurality, tolerance and creativity—and LLF has helped restore its true picture and that of Pakistan. It has reintroduced Pakistani arts and talent to global audiences through its foreign delegates, and it has revitalized Pakistani audiences by advancing awareness of what lies outside our borders and beyond our contemporary challenges. Crosspollination and the frank exchange of ideas contribute significantly to narrowing differences between peoples and nations. This is the role LLF has assumed, and it merits appreciation and support.

Festivals like LLF defy the complacency and ignorance that have come to shroud modern-day Lahore. They defy the dark image of Pakistan in the global news cycle. They defy the mistaken notion that Lahore’s best days are past. And they defy the myth that there is no audience or room for meaningful and civilized debate.

The works of its poets and writers—Faiz, Jalib, Iqbal, Manto, Sahir, Amjad Islam Amjad—convey the spirit of defiance that gives Lahore its creative spark. Lahore has always zealously fought to ensure that the flow of ideas is neither dammed nor monopolized. This is its real legacy. Today, guarding and channeling this legacy is not the privilege of Lahoris alone. It is a responsibility every Pakistani gladly owns and embraces; because in its history, in its values and aspirations, it is Lahore that will continue to lead the way for the rest of Pakistan.

The Punjab government remains firmly committed to protecting, preserving and promoting our shared cultural space. Its support to endeavors like LLF attests to this. Together with the City District government and the Alhamra Arts Council, the Punjab government views LLF as an unrivaled example of what the partnership between the private and public sectors can achieve. LLF has become one of the world’s most important literary festivals, and the Punjab government will continue to champion it.

Punjab has seen it all. The story of the Land of Five Rivers has all the elements of an epic: heroes of stature, acts of defiant valor, a breathtaking setting, style, strength, and an arc of enduring intellectual objectivity. Baba Bulleh Shah, Daata Ganj Bukhsh, Sultan Bahu, Baba Fareed Gunj Shakkar tread this land and inspired generations with their message of peace and amity. Mughal Emperor Shah Jahan ruled India from Lahore, and Emperor Jahangir is buried here. Lahore also gave us the Queen of Melody, Noor Jehan. And the majestic deserts of the Punjab put the lilt of longing and sense of parting in Reshma’s voice.

The ancient Gandhara and Indus Valley civilizations once stood in the Punjab. Stretching from Taxila in the west of Rawalpindi up toward Khyber-Pakhtunkhwa province, the Gandhara civilization is believed to have had the world’s largest university, with over 100 disciplines for students to choose from. This region also features several Buddhist holy sites that Pakistan has preserved. The Harappa or Indus Valley civilization, which had its own system of writing, was spread along the Indus River in parts of the Punjab and Sindh. Its two greatest cities, Harappa and Moenjodaro, were rediscovered in the 1920s. The Gandharan and Harappan ruins remain a source of endless fascination for tourists, archaeologists, and historians alike.

In 2011, the Punjab government established the Walled City Authority for the protection of Mughal-era heritage sites, the buildings and monuments that are the jewel in Lahore’s crown. With support from international organizations, the Walled City Authority has already restored the Delhi Gate, the Wazir Khan Mosque, the Royal Passageway and the Shahi Hamam to their original splendor. The Punjab government has worked closely with UNESCO for the protection of the Shalimar Gardens and Lahore Fort, near which the new Food Street provides for a magnificent evening out on the town.

Though chiefly Muslim, the Punjab’s character owes to the diversity of thought and ideas that came from invading armies and new settlers.

Like the Mughals, the Sikhs who ruled the Punjab for 50 years and the British also reshaped the city. Sikhism has its origins in the Punjab, and thousands of Sikhs make pilgrimage every year to Nankana Sahib, whose gurdwaras and Sikh holy sites have been restored. Sikhism is a bridge between the two Punjabs, Pakistan’s and India’s, which creates common ground and encourages the enhancement of trade and cultural exchanges between Pakistan and India. The British gave Lahore its Colonial-era marvels, including the Lahore Museum, Aitchison College, and Lawrence Gardens. These syncretic structures elegantly merge the old and the new, the Mughal idiom with the classical to endow the city with landmarks of lasting beauty.

Urban renewal requires not only the construction of infrastructure through roads and metro transport systems but also concrete, visible measures to safeguard our culture. In a bid to encourage tourism, the Punjab government has worked with Google to record and list the hundreds of spectacular sites and offerings that the Punjab and Lahore have to offer. In 2013, we launched a Web portal, goodnewspunjab.com, which publicizes the cultural highlights of the province, including its Sufi heritage, and the measures taken to promote tourism and broaden our shared cultural space. The annual Punjab Youth Festival is also part of this effort. With its emphasis on sports, sportsmanship and teamwork, this festival has set 24 Guinness World Records.

The physical space for the exchange and realization of ideas is critical. It was for this reason that the Punjab government restored and revived the Pak Tea House, where some of Lahore’s best and brightest—Ijaz Hussain Batalvi, Qayyum Nazar, Zia Jalundhari, Yusuf Zafar, Mukhtar Siddiqi, Intizar Husain—used to sit in the evenings to recite poetry and share their thoughts with each other and their fans decades ago. Its revival provides space for a new generation of aspiring poets and writers to shape the world of literature. Similarly, Nayyar Ali Dada’s iconic Alhamra Arts Center has also been given an extensive, thoughtful and befitting makeover.

There is, of course, much that needs to be done still. The Punjabi language, mother tongue to millions, deserves greater attention and promotion. Then there’s the springtime kite-flying festival of Basant, which used to bring hundreds of thousands of visitors to Lahore each year, injecting millions into the local economy. The courts banned the festival for safety reasons, and its revival is something Lahore has long demanded and clamored for. Basant can return provided a practical and sustainable solution can be found to address the concerns that forced its discontinuation in the first place. Punjab’s history and culture should also be taught as a subject in schools, colleges and universities. Original research on Sufism and religions, our ancient ruins and architectural gems, our Sikh and Colonial eras, our arts and craft must be encouraged, rewarded and made accessible.

Through the foreign delegates attending this year’s Lahore Literary Festival, we have much to show the world and we have much to learn. One hopes that all LLF delegates and visitors are able to see Lahore as we see it: as a place unlike any other in the world.

Some remarks to the ghost writer:
1. The Walled City Authority was established in 2013, not 2011. The law under which it was was established was enacted in 2012.
2. Wazir Khan’s Mosque has not been restored.
3. The Shahi Hammam is being restored with a grant from the Government of Norway, the Punjab Government only handed over the Hammam to the Aga Khan agencies to carry out it’s conservation.
4. The Chief Minister needs to be as sensitive as his support for LLF when planning his next series of transportation projects and not brutalize the city with ill bridges and flyovers with no thought given to their negative cultural impacts.