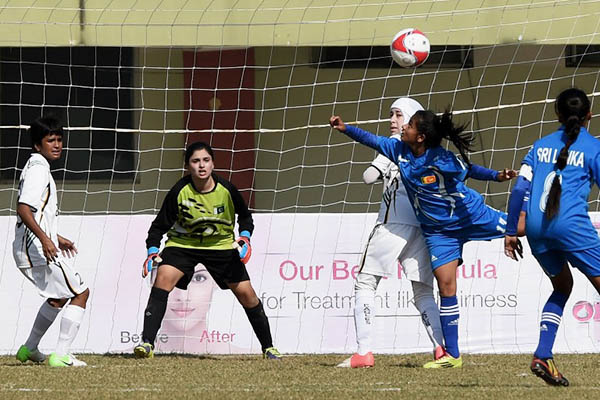 A young home-side were contained in their own half for most of the match by a composed Sri Lanka team, going one down before half time to a goal from midfielder Ishara Madushani. After the break Pakistan had several chances to equalize, but Sri Lankan forward I. L. E. Kumudumala added a second goal in the 86th minute.

On the stroke of full-time, Pakistan captain Hajra Khan scored a face saving goal in the 89th minute.

The first women’s national championship in Pakistan was held in 2005 but players were required to follow a strict dress code, wearing trousers instead of the shorts normally worn by the players.

Pakistan skipper Khan said the tournament would give her youthful side good experience of international competition. “We lack exposure, I am pretty sure if we get more international exposure, we can perform well,” she said. “We are a very young team and I think we gave them a good fight specially in the second half.”

The Pakistan Football Federation (PFF) promised tight security for the teams, after a suicide attack at a border post with India last week killed nearly 60 people. Doubts had been raised over whether the tournament would go ahead following the incident.

Monika Staab, a FIFA consultant for women football, said she had no security worries and said the tournament would send a good signal to budding young female players. “I hope all parents watching this and give the girls permission to play,” she said. “It’s a beautiful game and it’s not only for the boys, it’s also for girls.”

India will play their opening game against the Maldives in a group A match on Thursday while Afghanistan will face Bangladesh on the same day. Nepal take on Bhutan in the second match of the group B on Wednesday.