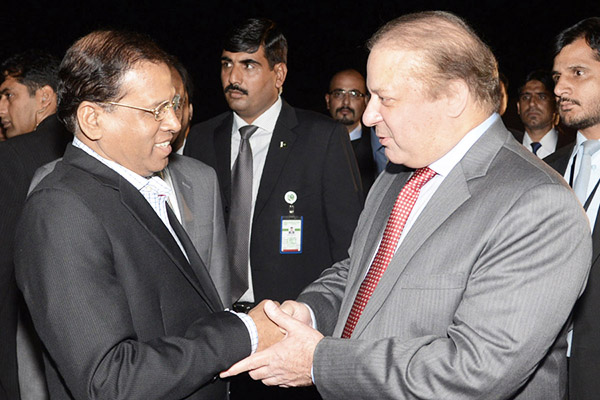 President Sirisena thanks Islamabad for its aid in the fight against terrorism.

Sri Lanka and Pakistan signed six agreements including one on atomic energy Monday, the two countries’ leaders said, as the strategically important island looks to build its first nuclear plant.

Details of the agreement were not immediately available but it comes after Sri Lanka signed a pact with India in February to build its atomic energy infrastructure, including training of personnel.

Sri Lanka’s new president Maithripala Sirisena swept to power in January, ending a decade of rule by Mahinda Rajapakse, and has moved to reduce China’s influence in his country, which had irked India. His arrival in Pakistan on Sunday for a three-day state visit has been watched by observers for clues over any further changes in Colombo’s foreign policy.

Pakistan and Sri Lanka have traditionally enjoyed strong ties, particularly over defense, with Islamabad providing military assistance during the war against Tamil Tiger guerrillas that ended in 2009.

Speaking at a press conference with Prime Minister Nawaz Sharif, Sirisena said: “At critical moments in our post-independent histories we have stood in solidarity with each other,” adding he was “profoundly grateful for the strong support in the fight against terrorism” by Pakistan. “We discussed regional and international agreements and signed six agreements in the fields of disaster management, sports, shipping, atomic energy… and in narcotics and academic cooperation,” he added.

Pakistan currently has three operational nuclear plants generating a total of around 740 MW of power and has begun work on two more, including a 2,200-megawatt station to be built with Chinese technical assistance on the Arabian Sea coast at Paradise Beach.

Earlier, Sharif had spoken of his desire to improve trade and economic relations.

Sirisena will also meet President Mamnoon Hussain during his visit and is due to leave Tuesday.

Good for Sri Lanka and Pakistan, both states have been the victim of Indian aggression. No one can forget the Indian involvement in Tamil conflicts and Indian missiles directed towards the Sri Lanka. Nuclear cooperation between both states have long been discussed as Sri Lanka believed in the nuclear technological superiority of Pakistan. On the same page both states should also indulge in other defense and trade agreements.

This is highly appreciable that both South Asian countries Pakistan and SriLanka join hands together in different areas of cooperation. All the respective areas which have been highlighted for agreements certainly strengthen the bilateral ties for two states but also impact the air of regional cooperation for rest of the regional nations. SAARC is an assigned platform for regional cooperation for South Asian but it is highly dominated with Indian aggressive policy towards smaller states. This emerging bilateral tie certainly enhances mutual cooperation for addressing economic interests and give a boom to development in respective fields

It is significant for the business community and chambers of exchange of the two countries to completely avail the enormous trade and business potential, the two countries offer, in varied fields including financial and banking sector, science and technology, defense, agriculture, tourism besides promoting cultural exchanges. Srilanka and India also went for talk on civil nuclear agreement but Srilanka backed off due to Indian reaction at UN resolution where India voted against Srilanka.