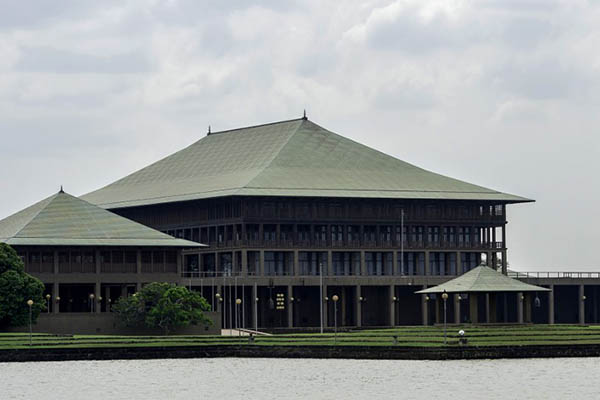 The heavily guarded court also halted preparations for a snap election in the latest twist in a power struggle that began when Sirisena dismissed Wickremesinghe on Oct. 26 and replaced him with former strongman president Mahinda Rajapakse.

Speaker Karu Jayasuriya announced that the 225-member parliament will meet on Wednesday, clearing the way to decide which of the dueling pair it backs.

“Parliament must now perform its role by allowing the elected representatives of the people to reach a determination on the legitimacy of their government,” Jayasuriya said in a statement.

Amid mounting international concern, Wickremesinghe has refused to accept his sacking and has remained in his official residence while Rajapakse has sought to build a parallel administration.

Wickremesinghe’s United National Party (UNP) is the largest single group in the assembly. He told reporters that he expected to prove his majority. “I will go to parliament tomorrow [Wednesday] and we will show we are the legitimate government of Sri Lanka,” Wickremesinghe said at the Temple Trees residence that has become the opposition headquarters.

Wickremesinghe called the court ruling a “victory for the people and a victory for decent politics in this country.”

For its part, Rajapakse’s party said they would appeal to a fuller bench of the highest court in the land to reconsider Tuesday’s decision.

The controversial former president’s legislator son took to Twitter to deny speculation on social media his father was planning to step down and avoid facing a vote in parliament. “Rumors circulating that PM @PresRajapaksa resigning is completely false,” Namal Rajapakse said referring to his father. “We will all attend parliament tomorrow.”

The UNP led petitions against the dissolution of parliament and the three-judge bench, headed by Chief Justice Nalin Perera, gave the landmark decision to a packed court guarded by hundreds of heavily armed police and commandos.

Tuesday’s ruling suspends Sirisena’s proclamation dissolving parliament last Friday, pending a final determination in the case. The court said it would give a final verdict on the petition on Dec. 7, after three more days of hearings.

The judges ordered the independent Elections Commission to halt preparations for the Jan. 5 vote, which Sirisena had announced on Friday.

Security at the courtroom had been beefed up ahead of the hearing as authorities feared clashes between rival supporters.

President Sirisena’s office said he “ordered security chiefs to strengthen the peaceful situation in the country” following the Supreme Court ruling. However, there was no trouble and supporters of Sirisena melted away when it was known that parliament had been restored.

The United States, European Union and other powers have raised concerns over the crisis in the strategically important island nation of 21 million people. Only China has recognized the appointment of Rajapakse, who during his decade as president until 2015 relied heavily on Beijing for diplomatic and financial support.

As president from 2005 until 2015, Rajapakse ended Sri Lanka’s four-decade civil war in 2009 by crushing the Tamil Tigers. But 40,000 ethnic Tamils were allegedly massacred in the process.

During an earlier stint as prime minister from 2001 until 2004, Wickremesinghe is credited with pulling Sri Lanka out of its first ever recession, in part with reforms that have endeared him to the West.