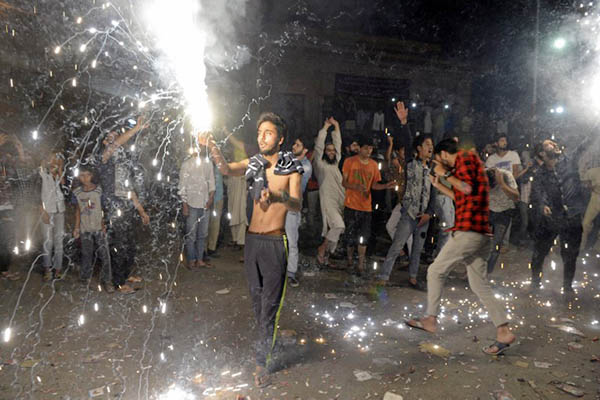 Young men gathered in mass at TV shops across the India-administered city of Srinagar as Pakistan belied expectations to thrash Virat Kohli’s team by 180 runs at the Oval in London. Kashmiri Muslims, who traditionally support Pakistan in cricket, especially against India, took to the streets after the win waving Pakistani flags and chanting “Jive Jive Pakistan [Long Live Pakistan]” as fireworks exploded over Srinagar’s skies.

Anti-India sentiment runs deep in the Kashmir valley, where most people favor independence or a merger with predominantly Muslim Pakistan. “This is the moment we were waiting for… It is a dream come true,” a Kashmiri youth shouted in support of the Sarfraz Ahmed-led Pakistan team.

India-administered Kashmir has been tense for months as violence between security forces and rebels fighting to end Indian rule have intensified since the killing of a popular militant leader last year. “Winning this trophy apart, I am celebrating my political sentiment as well,” Amir, who gave only his first name, told AFP outside the grand mosque in Srinagar’s old town of Nowhatta. “This was long overdue.”

Earlier in the day Indian paramilitary forces patrolled various parts of the city but were withdrawn to avoid clashes with the civilians. “An India-Pakistan cricket game is always a unique challenge for us. We have to remain on tactical alert,” a senior police officer told AFP on the condition of anonymity.

Underdogs Pakistan, who lost their opener to India by 124 runs, turned around their fortunes in the 50-over tournament to clinch their maiden Champions Trophy crown. Pakistan, the bottom-ranked side in the eight-team event, rode on opener Fakhar Zaman’s maiden one-day international century to post 338-4 and then bundled out India for a paltry 158 in 30.3 overs.

Further south in Delhi disgruntled Indian fans quietly walked away from open-air screenings in disbelief. “I am shocked… we thought we would have them for dinner, but it has turned the other way,” Amit Sharma told AFP at Delhi’s Connaught Place. “We had planned big celebrations for what seemed like a sure shot victory for us with the way we were playing and also how Pakistan had just scraped into the final,” Sharma added.

Delhi’s streets were all but deserted after the game ended with fans storming out of public screenings after Hardik Pandya’s 76-run blitz ended with India staring down the barrel at 152-7. While some fireworks were ignited at the National Stadium near India Gate, Sanjay, a disappointed fan, said they were “fireworks of anger.”

“A loss against Pakistan is always a bitter pill to swallow. But you have to applaud their brand of cricket and their comeback in this tournament after being crushed by India,” Raju Verma, an auto driver, told AFP.

It was Pakistan’s first global 50-over title since the 1992 World Cup.